The big day is here! The Queen stage of the whole Giro, and I’m here to see it! Colin’s alarm went off at seven, as usual, but neither of us arose until around 8:30. Both little dogs ended up on my bed after Colin had gotten up from his – guess I’m an honorary auntie now! Had a nice cup of hot tea, ate a (now crunchy) bunwich of camembert with sliced chicken, then headed up to the cafe, and to see what the crowds were like. Riders have been coming up the mountain ever since I got up. It’s another bright sunny day, although the wind is making it a bit colder. 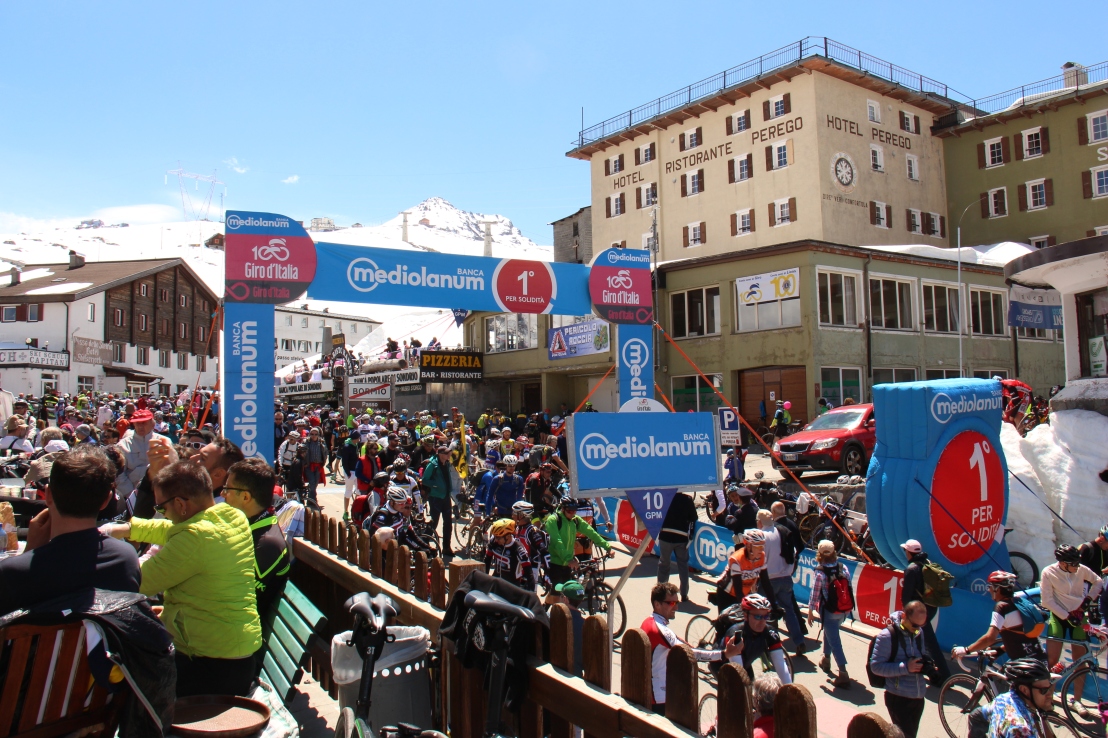 Had another cup of tea in the cafe, caught up on my blog with their free wi-fi, then went back to the campervan. There’s always something to see – some folks are painting something on the road below us, some others are unfolding a very long banner in the snow above and across the road from us – must be for the helicopters. They’ve been erecting the crowd barriers all morning, and have setup the large ‘top of the pass’ banner already. More folks arriving every minute – cyclists, campervans, even large tour busses – don’t know where they’re all going to go. 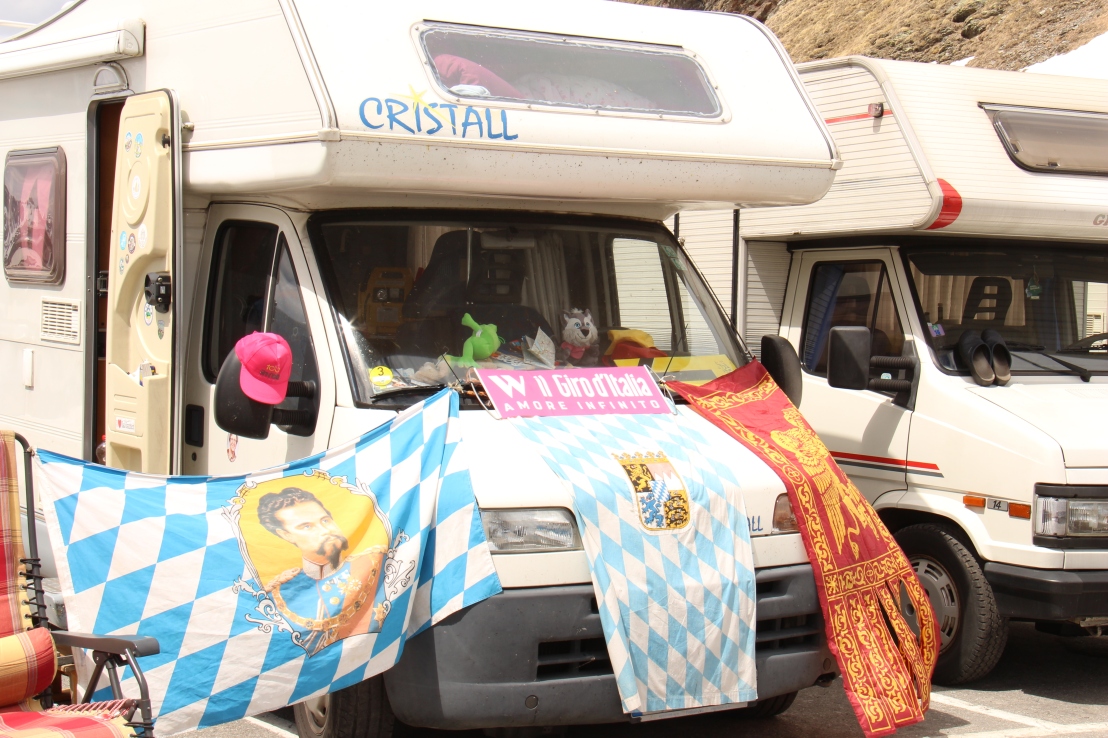 Sat in the sun for a bit and read a very good John Grisham novel Colin had – loading up my charger with the solar panel. Walked back up the hill to the top – could hardly find a path that didn’t have a cyclist either going up, or going down. Used the WC in the cafe, then decided a glass of wine might be nice. Could have sat at a table outside with some other people, or order for myself at the bar, but the lineup was out the door and around the corner, and the servers seemed extremely harried. Walked to the ‘hotel’ side to see what was happening – there was a big buffet and lots of people. I walked thru but there wasn’t really a bar that I could order a glass of wine at – ‘spoke’ with a couple of Italian fellows – indicated that I was looking for vino. One of them pointed to the corner behind them – the bottle is open – there are the glasses. I introduced myself in Italian and told them I was from Canada. One of them said his family name is Wendy – although I’m sure it’s spelled differently. Walked over to where a server was, and asked for some vino rosso – she grabbed a bottle and said it was Chianti and then grabbed a very large glass and proceeded to fill it half-full. I reached for my money belt and asked how much it was – she just shook her head, winked at me, and walked away! I sipped it as I walked around the dining room, left the empty glass on an empty table that hadn’t been cleared yet, and walked out. 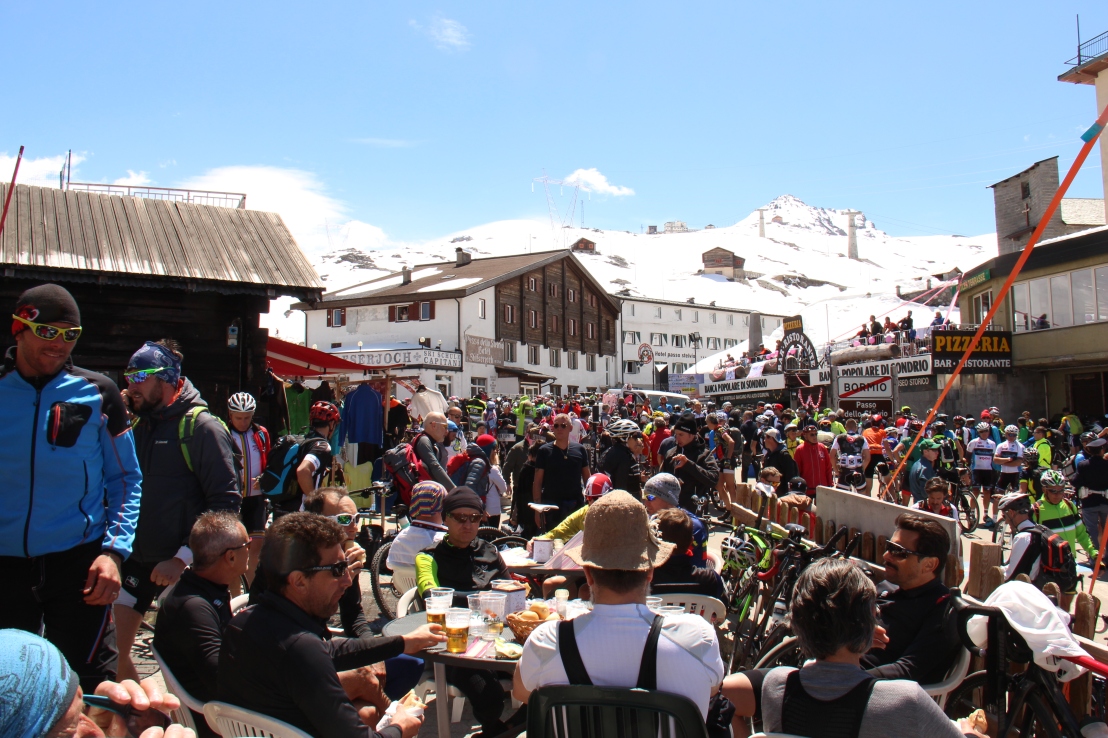 The road was so crowded you could hardly move, then we heard the sounds of police bikes/cars coming up from the other side. Where they thought everyone was supposed to go was beyond me – there were people and bicycles everywhere – everyone just glad to have made it to the top of the pass, get a pic taken by the top-of-the-pass sign, or getting ready to descend.

Came back to the campervan – watching the race on satellite tv. It’s a French station, but I can understand certain things. They keep mentioning Stelvio, so even though they’re currently riding up the first mountain of the day, this is obviously the one on everyone’s mind. I even heard the announcers mention Canada a couple of times, and sure enough when they showed the riders in the breakaway there was Michael Woods – a Canadian! Apparently it’s about 5 above here, and the sun is still shining brightly.

Helicopters started to fly over around 1:50 and the motos and officials cars arrived shortly after. It was awesome! The crowds went nuts every time an Italian rider went by. Started my viewing on the snow hill in front of the campervan – got a decent pic of Dumoulin and Nibali without knowing it. 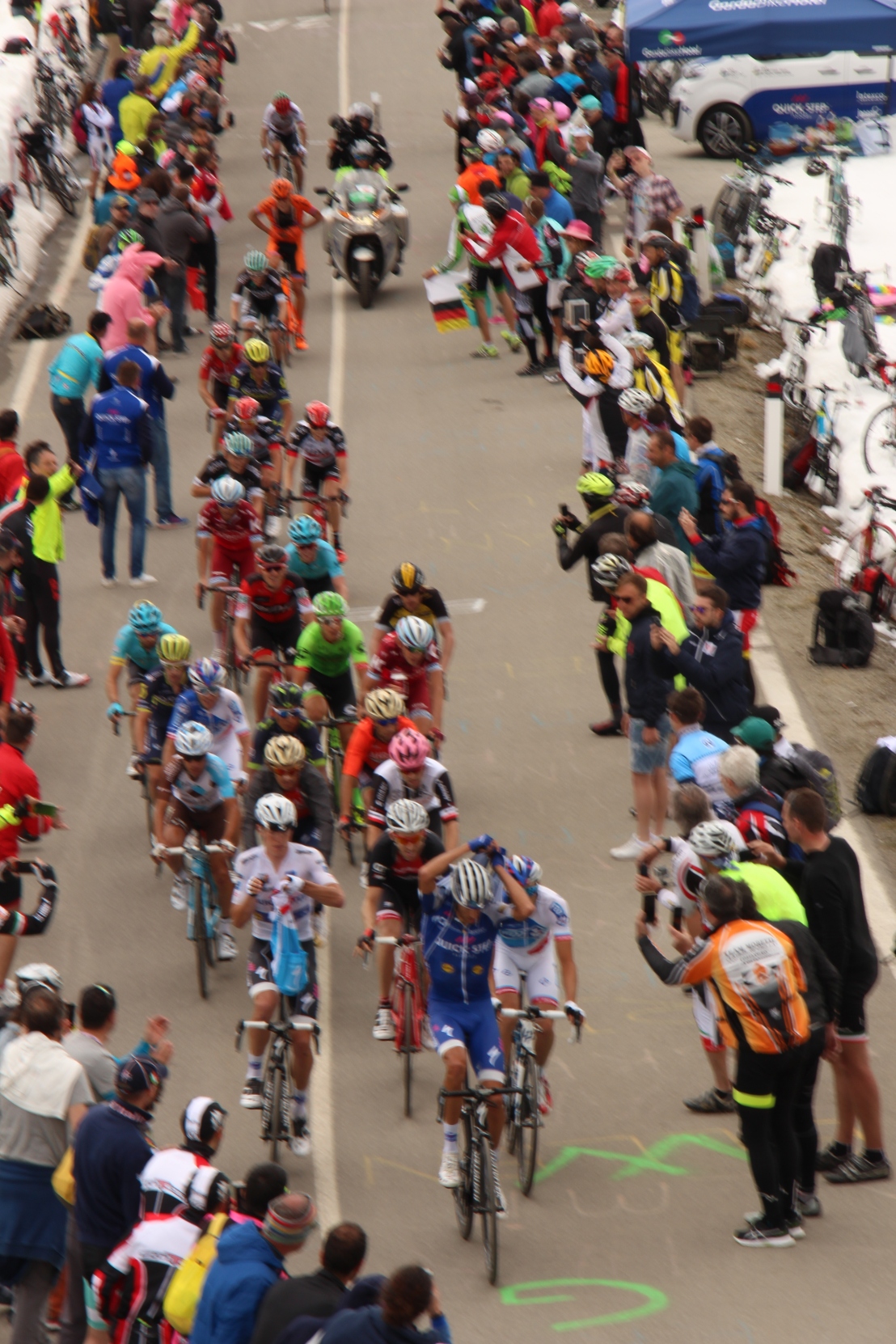 Moved to the straight stretch after the last hairpin just below the summit. Was about to take a pic of a large group coming up when an Oriental girl rushed up to the barrier and leaned way out right in front of my camera lens. I had to say ‘excuse me’ loudly three times before she moved her fat head out of the way. 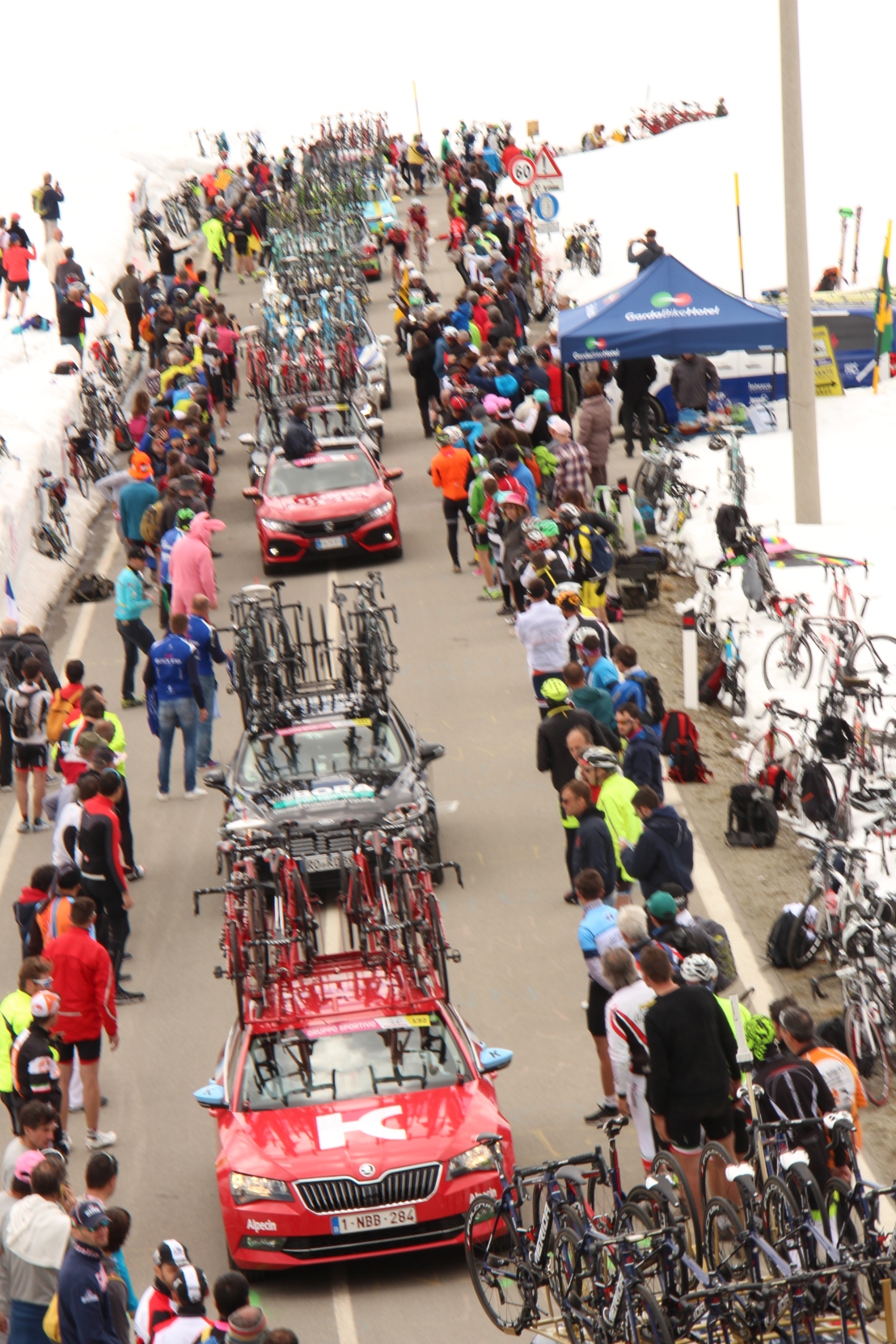 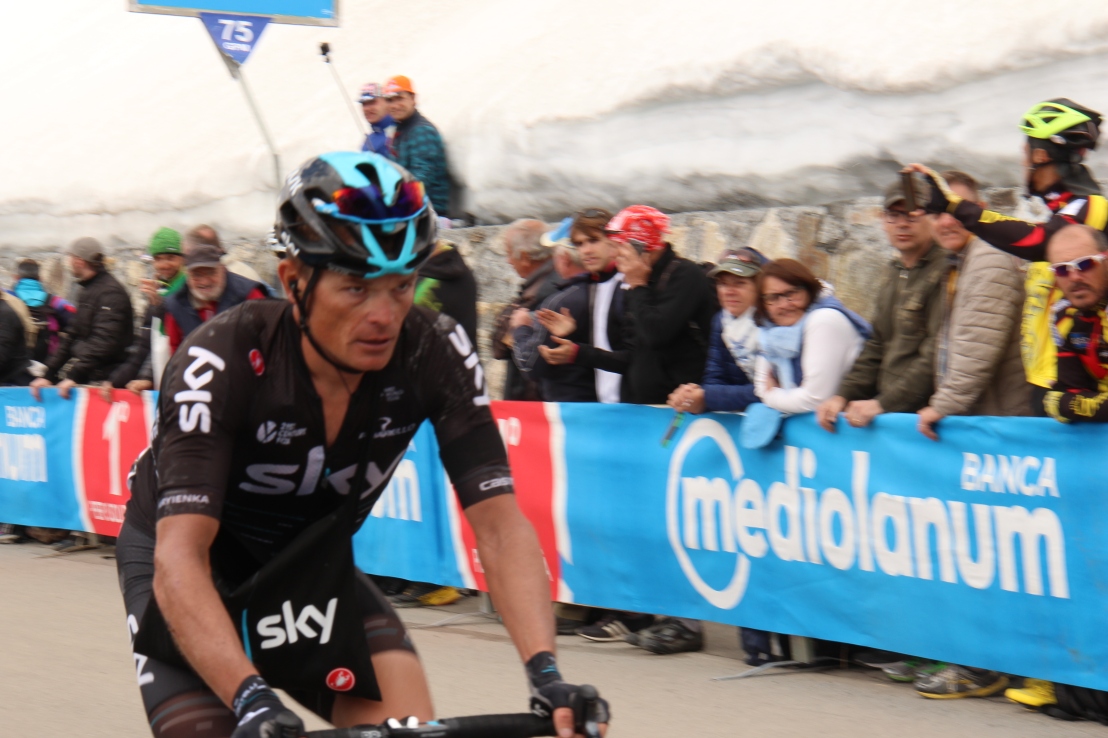 The sprinters all came by in a group at the end – they got very loud cheers from everyone. 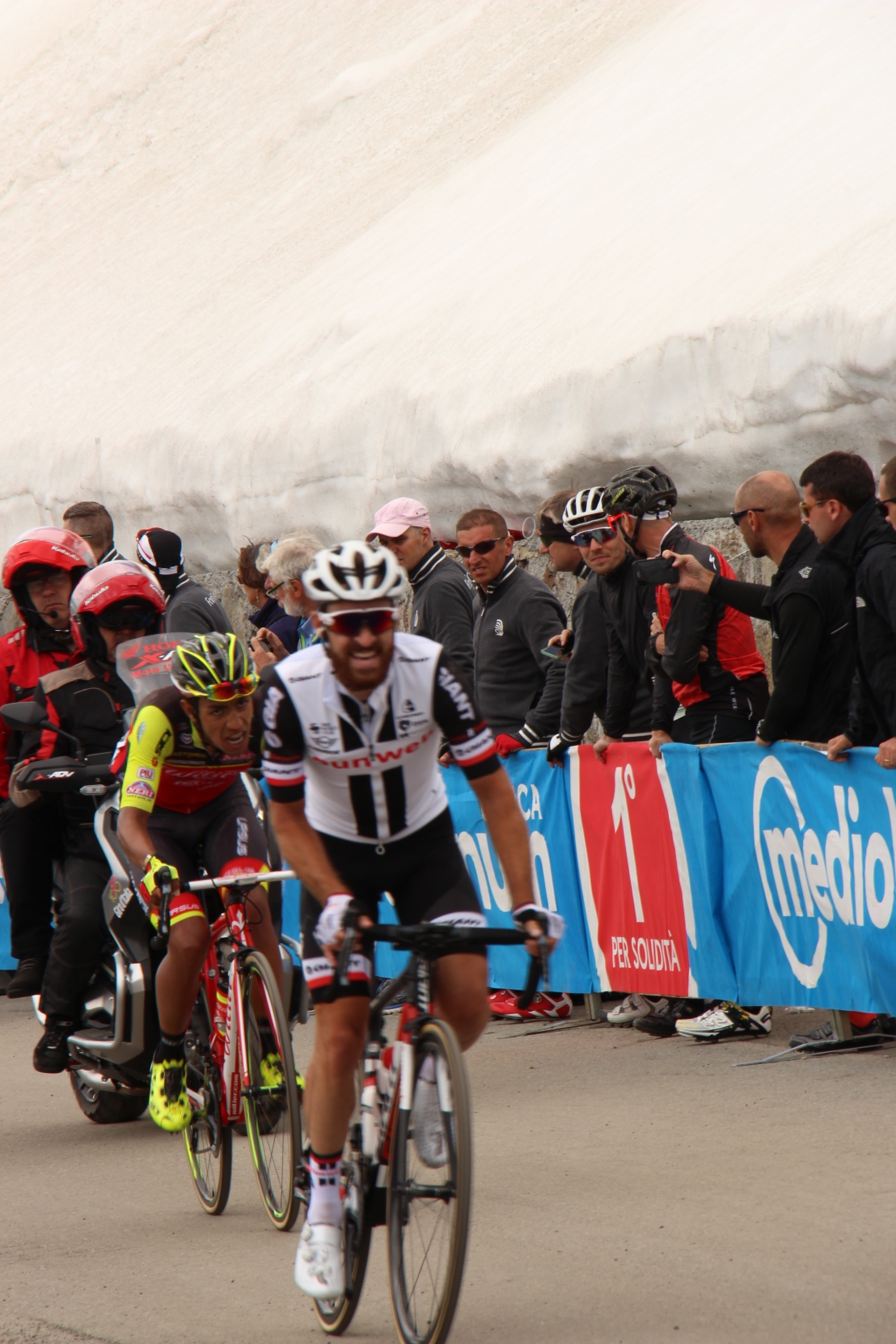 The second the last rider went by the crowd was all over the road again and cyclists were going up and down again, then the place really started clearing out.

Went back to the van and watched the rest of the race on tv. Could see part of the route 3 km below where the race re-joins the road after the sashay into Switzerland, then they go downhill back into Bormio.

Had a bite to eat then headed back up to the cafe to face-time Dom and have a really cheap, but decent glass of wine (wine is cheaper than tea!). Place seems almost deserted after this afternoon, but they’re probably still busier than they’ve been in months.