The Hungarians didn’t arrive back at the hotel until about 1 minute to midnight, but were very quiet as they tiptoed thru my room to get to theirs (I just happened to be awake). There was a terrific storm at some point – lightening was so close it lit up the room, and the thunder shook the bed. Rain just poured, but I don’t think it lasted too long – glad I wasn’t in my tent.

The party of 55 Czechs arrived two hours early – I was still packing my stuff up when they arrived and filled the courtyard. I put my bags in the corner under the arbour for now as it would be nice if the ground dried out a bit before I pitch my tent for the night. The Czechs are leaving tomorrow so it’s only for one night, then I can have the room back.

Walked down to the old city again, stopped at the large graveyard and had a better look around. Most of the markers are for folks that died in the siege/war – death dates seem to be mostly 1994-95. Such a stupid, stupid waste of lives. 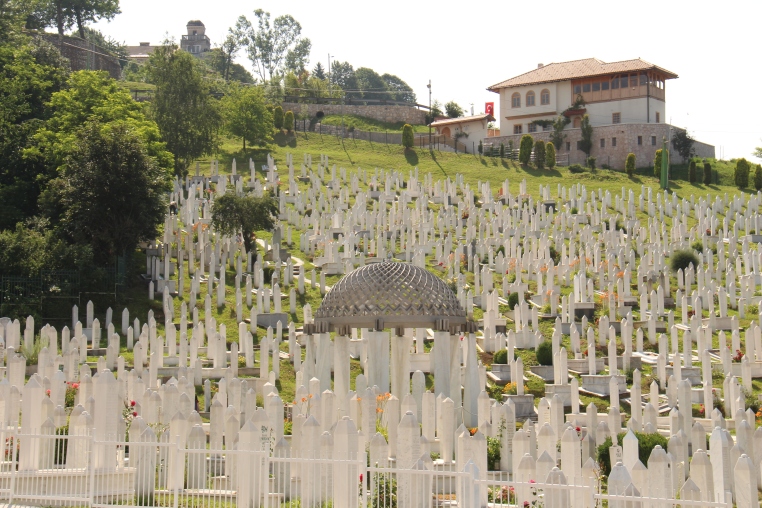 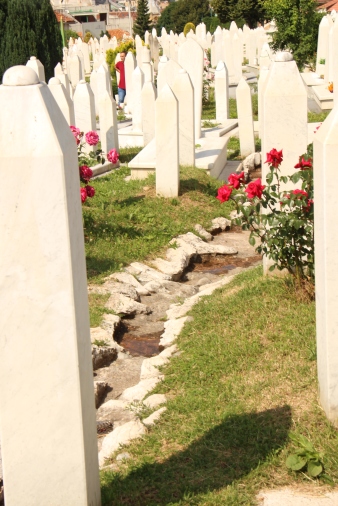 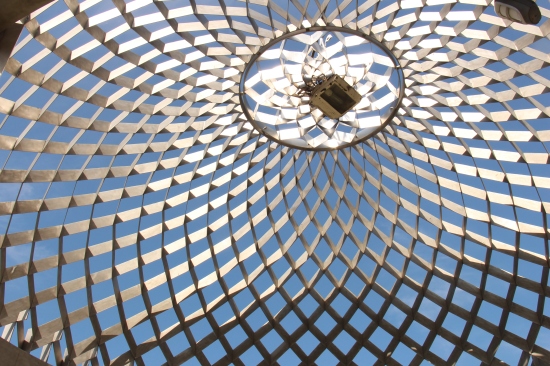 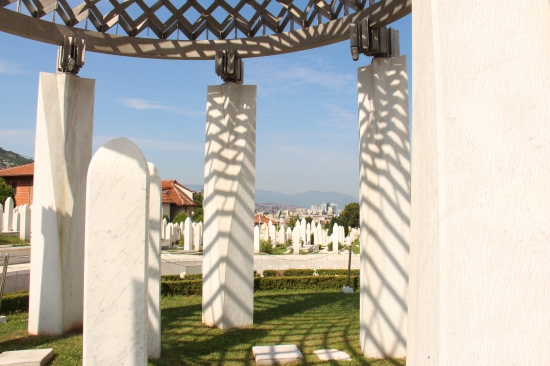 Got more cash from a machine, then found a cafe that doesn’t mind me just getting a cup of tea and using their wi-fi (which is very good – not like at the hotel). Stayed there for almost 2 hours, then got some food to go – the local speciality of ‘meatballs’ (more like sausages) with meat pattie in a huge pita-like bread with tomatoes and chopped cabbage (or something). Got some more fresh veggies at the store on the way ‘home’. 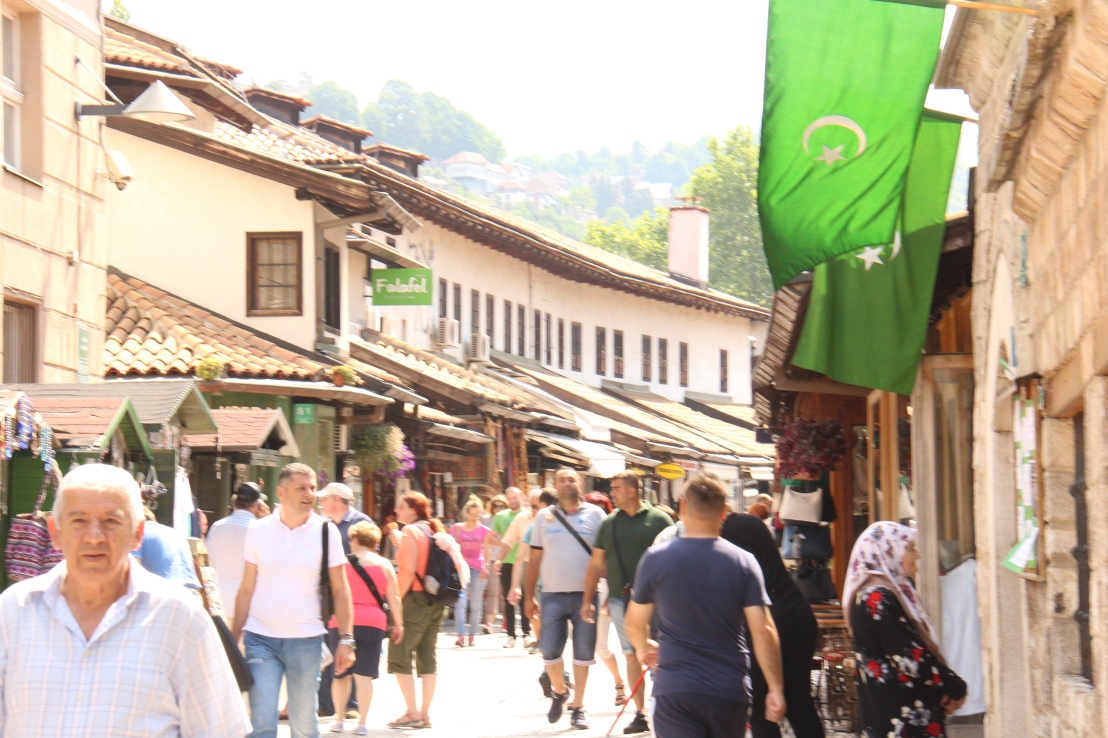 Ate lunch as usual under the arbour then the Czechs started arriving from their various outings a few at a time. One unlucky fellow had his wallet stolen out of his pocket – what a drag. Pitched my tent under the cherry trees in the back yard. Heard back from Colin – plan to meet in Pinerolo Italy on or about July 6. I should be able to get there by Tuesday or Wednesday, so will be there for a week or so before Colin arrives.

I had another long chat with Mirza’s brother Sead – they, along with their father own the hotel/hostel/campground. They seem to like talking with me – we’ve had many long conversations. I think that they think I’m kind of strange – no woman they know would ever dream of doing what I’m doing (or be allowed to by their husband!).

Had a nice visit with a couple of the young Czechs – Chantal and Marketa. They had a really nice outlook on politics and life in general. Maybe there is hope for the next generation after all. 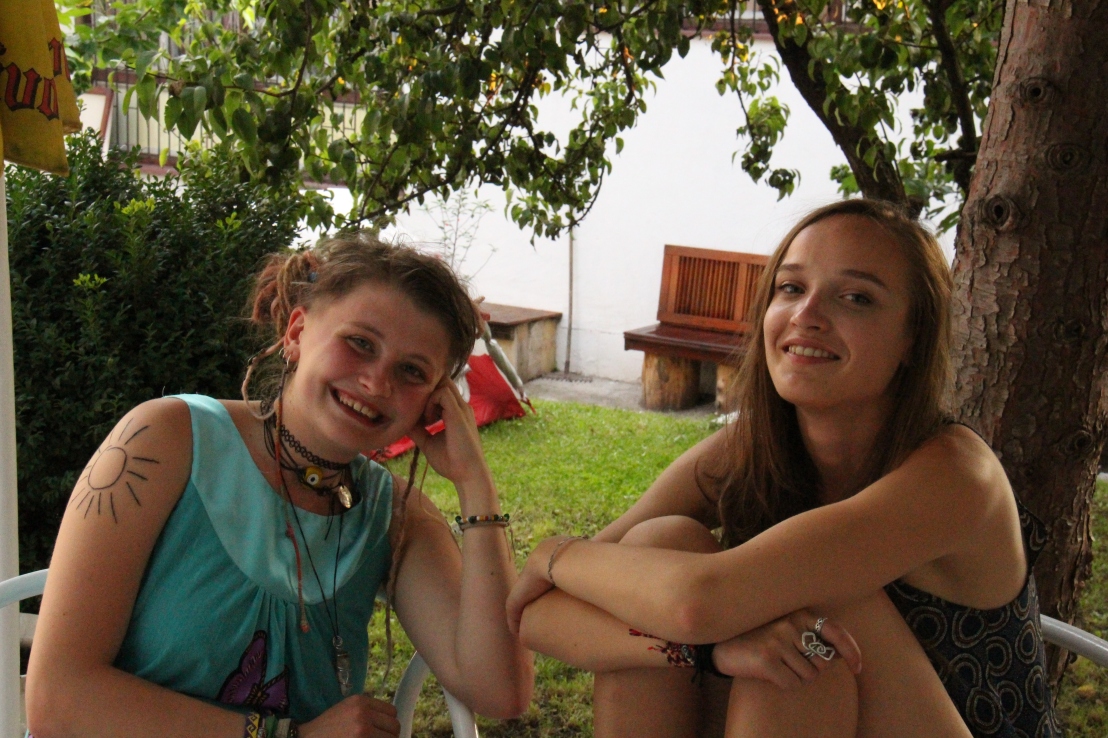 Went for another walk to the old city shortly after sundown so I could face-time Dom, then came back and visited with Mirza, Sead and 3 different young Czechs. The chaperone came and advised the girls not to stay up too late as they’re heading out at 8 in the morning. 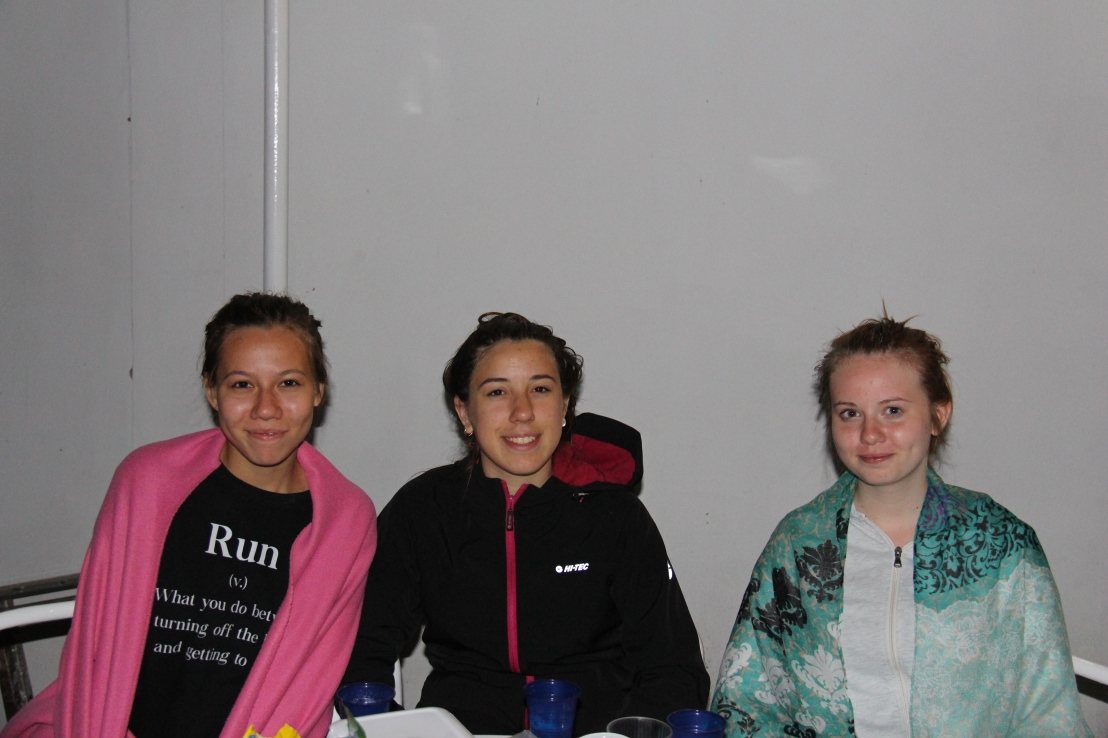