Got up before 7:30 so I had time for a nice hot shower before I packed up the tent – it was soaked from condensation, but I folded everything up and put it all in the wetbag. Headed to the village of Cerezo de Rio Tiron, where we met some friends of Neil’s friends – Colin had met them a few weeks ago in Mansle and they live in Logrono and have a summer house in the village. They are Ricardo, his wife Christina and their daughter Lucy (Lucia). Ricardo is a teacher, and is also very interested in cycling and the cycling races. The ITT of this year’s Vuelta ends in Logrono, so he’s going to help us find a spot along the route to watch from.

We had a really nice walk around their village then sat for a drink at a cafe before going to their house for lunch. 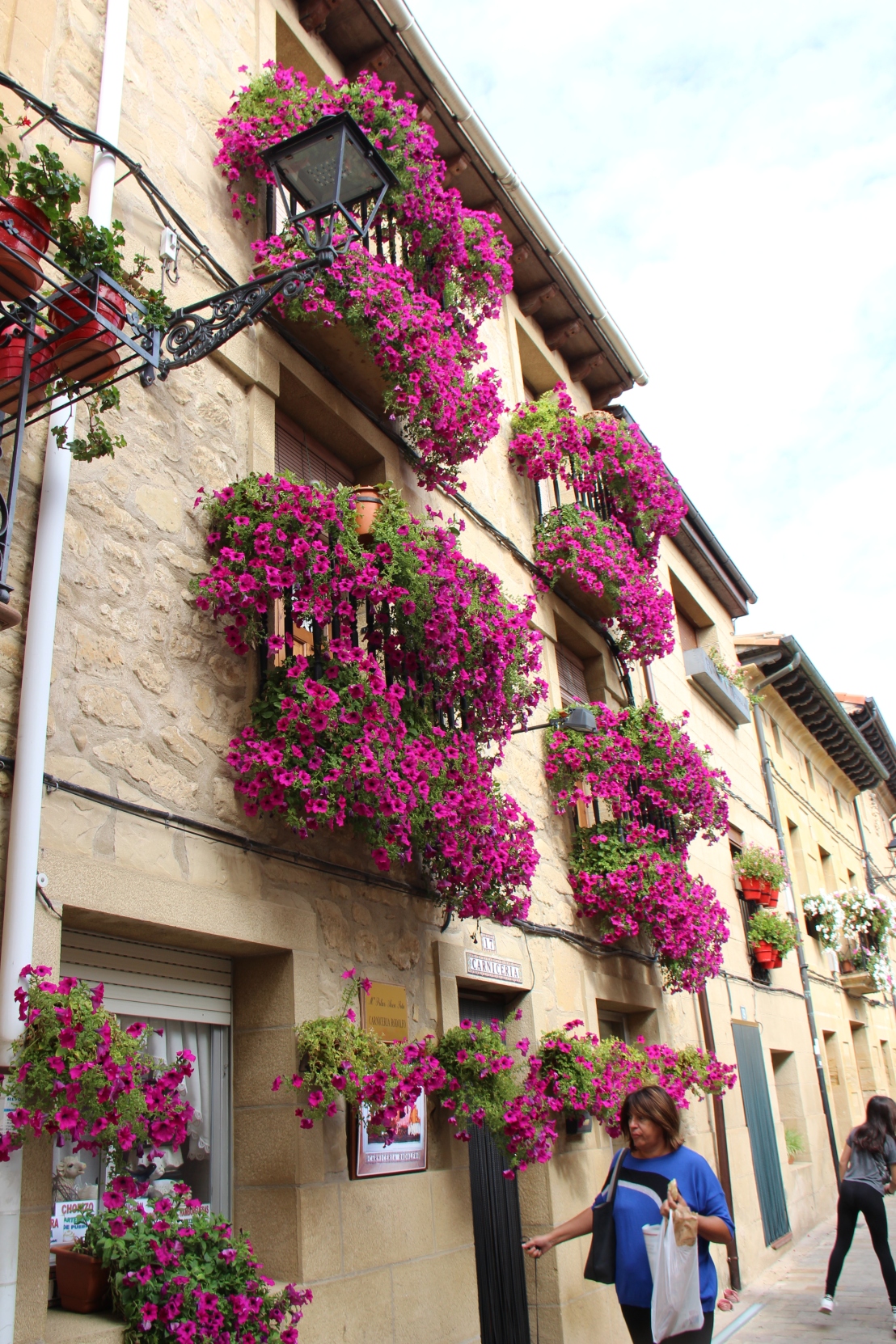 They have a black and white cat named Daisy and she seemed friendly enough to me until she smelled the dogs on my hands – then she hissed and pulled away. I’m not used to cats that don’t like me.

Lunch was excellent – tomatoes with garlic, prosciutto, chorizzo, and some kind of mushroom with bacon (or something). The main course was very tender and delicious lamb in tomato and red pepper sauce.

After lunch we took a short drive to another village – Sajazarro (?) which was voted one of the most beautiful villages in Spain. Hardly any cars are allowed so we parked outside and walked in. It was lovely – a really nice park, a castle (now privately owned) and flower-decked winding streets. One of the streets is so narrow they have a sculpture of two arms reaching towards each other and almost touching.

Had another drink at a cafe there, then followed them back to Cuzcritta, where they collected the cat, and returned via a different route back to Logrono.

After they dropped the cat off at their place in the city they led us past the campervan service place that hopefully will be able to fix the blown fuse tomorrow morning. Next they led us out along the ITT course to a place that Ricardo had scouted out as an ideal spot for us to park it for 2 days until the race. It is perfect – at the top of a small hill and at a curve – we’ll be able to see the riders coming one-by-one straight at us. It’s also right on the Camino route – there’s a couple of benches for the hikers to take a rest on, as they come up a very steep hill right at the spot we’re at.

The family left us there – we’ll see them again tomorrow as it’s a rest day for the Vuelta and the riders will all be testing out the course and getting ready for Tuesday. Spread out all of my wet camping gear hoping the black clouds overhead don’t open up and soak it all again.

We decided it might be best if I didn’t pitch the tent tonight – there’s really no flat space, and what there is is covered with thistles and ant-hills. We re-arranged the inside of the campervan so that I have my sleeping space and Colin and the dogs have theirs. I woke up a couple of times in the night to the sound of rain on the roof – just as glad to be inside.