Colin’s alarm went off at 7:00 and we decided that I might as well go into Logrono with him to get the van checked out rather than waiting by myself at the spot we’ve chosen to watch from.

Found the campervan place no problem – GPS is great and Ricardo did take us to it last night. He met us there at 8:00 in case Colin needed an interpreter, but the electrician spoke very good English.

Ricardo and family had gone to the airport last night when all of the riders arrived from down south – he has photos of himself with Contador, Froome, and a bunch of others. Apparently there were some press folks there but hardly any other fans and the riders were happy to pose for shots with them – I wish I’d been there!

The problem with the van was only a fuse (as we’d suspected and hoped) and took only about 15 minutes to change. One of the problems is that Fiat doesn’t always put the fuse box in the same place on every model so sometimes they have to search for it. Anyway it was quick and easy and not outrageously expensive. I took the opportunity to use the WC and I must say that for an autoshop it was a very nice one – I guess they cater to a more wealthy crowd and need to keep up appearances. 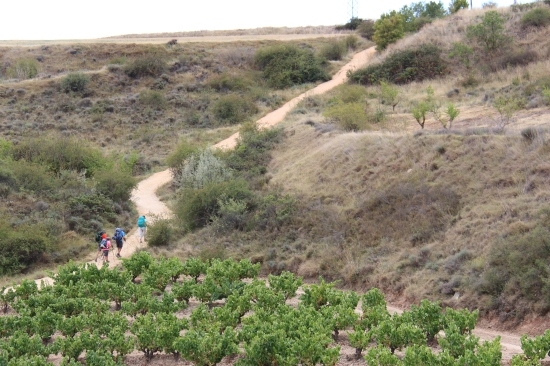 Back at the chosen spot there was another, large campervan parked on the road right at the entrance to the pullout, and several more arrived during the day. Camino hikers by the dozens passed by, many stopping for a rest after the very hard climb getting here.

I took the dogs for a walk down the hill, and it is extremely steep. We walked back up the road – several more campervans are down at the next bend.

Talked to a few of the walkers – one older couple from Calgary, whose son lives at the coast, and a group of four that were two Irish, one Canadian (from Courtenay) and one American (who did admit to sometimes saying he was a Canuck!). 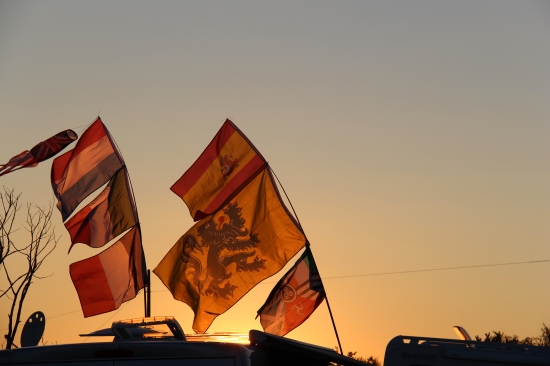 There are some other interesting flag displays, and the folks down at the first bend have written a bunch of stuff on the road. The almost-full moon came up as the sun was going down – colours were spectacular – a beautiful end to the day.