Today is the first day I got to be an official photographer of a cycling race, and got to be ‘behind the scenes’ the whole time!!!  Ok – it was a local kids’ race, but it’s a start…

Colin and I headed down the street to the main square just before 10:00 (Mo had to stay at home) so he could help load up the local cycling team’s van, which he is driving today in the race in the nearby town of Saint Angeau.

There were already barriers setup, as well as a covered food/coffee area and a podium, and they were setting up a sound/mike system.  We were called together with the other volunteers just before noon to a small building across the street where we were given lunch – wonderful crispy/soft baguettes with very tasty pate, ham and tabouli, and some of the tartest pickles I’ve ever eaten.  For dessert there was a flan-type thing that I didn’t care to try, and the creamiest, most delicious camembert ever.

As soon as we were finished it was back to work for the rest of the folks, and back to taking photos for me.  The kids were starting to arrive and sign in – as they registered they were given a number to be pinned to the back of their jerseys.

They ranged in age from about 5 years old to 14 or 15, including several girls, and the first races were sprints one-by-one to the line – about 100 metres for the smaller kids, and 150 or so for the older ones.  The road of the village was closed, so the main drag was just for the racers. 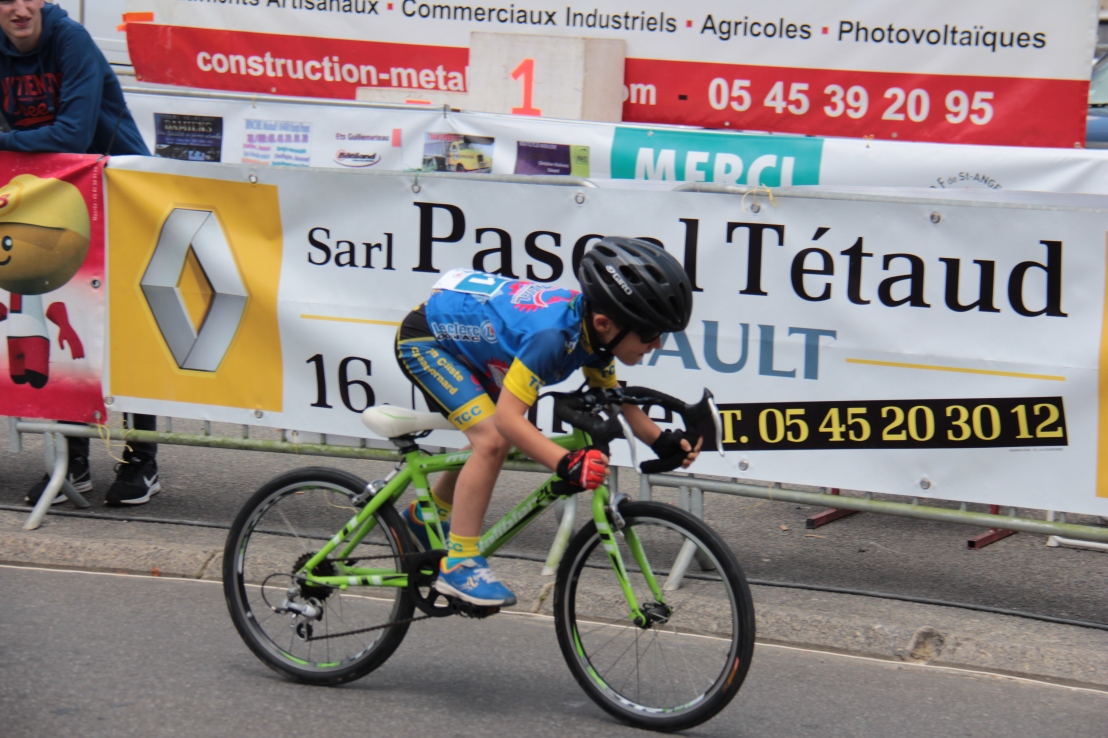 Then the road races were on – Colin was driving the lead-out car and I went with him on the first round, which was the little ones.  They did a warm-up ride halfway around the course, then they lined up for the actual race back to the finish line in front of all of the ‘fans’.

They were so cute! Each of the youngest racers had an older one riding behind them to encourage them and make sure they were ok along the route. And the road wasn’t actually totally closed – they let cars thru from time to time and it was a bit annoying – I felt somewhat ticked-off on behalf of the racers.

After the first race with the little ones I jumped out of the van so I could take photos of the next races as they passed the finish line – the next oldest group did 3 laps, then the next did 5, followed by 8, then the oldest racers did 13 laps.

There were two of the older riders that were far faster than the rest – they lapped many of them at least once, if not twice, and were only a couple of feet apart at the end.

A man that had a couple of kids racing came up to me to ask (in French) if I got a shot or two that I could email to him – I downloaded what I’d already taken to my ipad and he found a couple with one of his sons, then I identified a few more.  He wrote his email address on a scrap of paper for me but I couldn’t read his writing – Colin gave him a business card later so he can get ahold of me. Maybe I should have my own business cards – ‘Sally McKenzie cycling photography’! 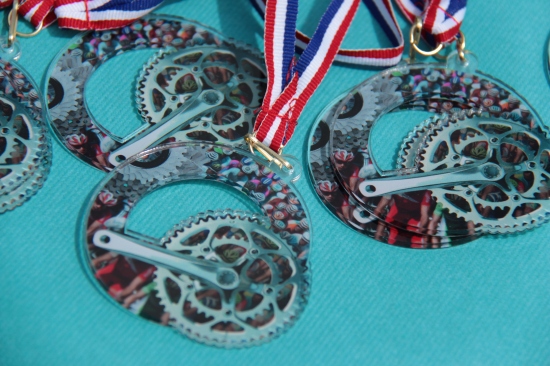 After the last race was over the medals were given out – every single racer got one, and the 3rd, 2nd, and 1st placers got trophies as well.

Most of the racers looked like they had a lot of fun, but of course there was the odd parent that was a little too serious – happens in every sport.  Maybe there’s a budding Sagan or Contador in the bunch. One of the littlest girls got a medal a small trophy and some flowers – she held them up and didn’t stop smiling for about 10 minutes. 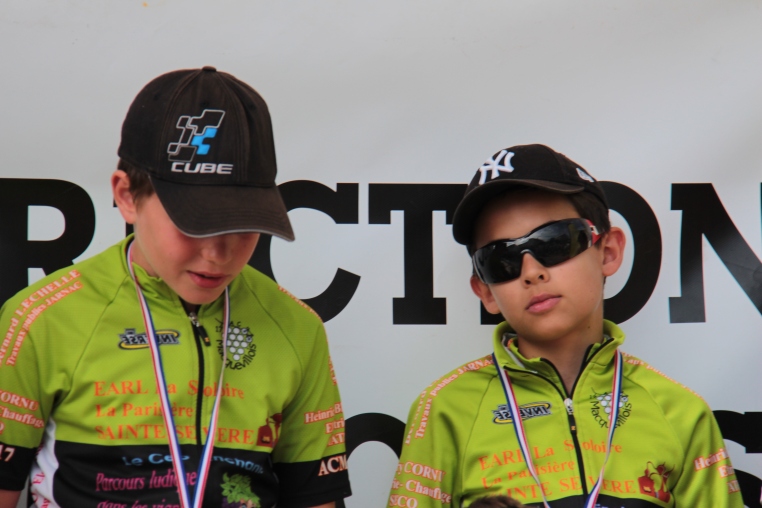 As soon as everyone started leaving the volunteers began tearing down the barriers, etc, but then we were all called together for a celebratory drink and some snacks.  I told Colin that I thought it was peach juice, but it was definitely spiked.

After the van was loaded we headed back to Mansle, and I sat at the bar while Colin helped unload the van.  It ended up being a fairly long day – starting at 10 and not getting home until around 8, but it was so much fun.  All I needed was an ‘official pass’ slung around my neck – maybe next time!