Today went on a road trip.  Got on the way around 9:45 or so, and headed west to Saint-Jean-D’Angely then southwest to Saint-Savinien.

There was a regional cycle race happening there so we drove around the town a bit trying to find a place for a coffee – lots of people but nothing open.  There were some of sculptures on the sidewalk on the road next to the river.. 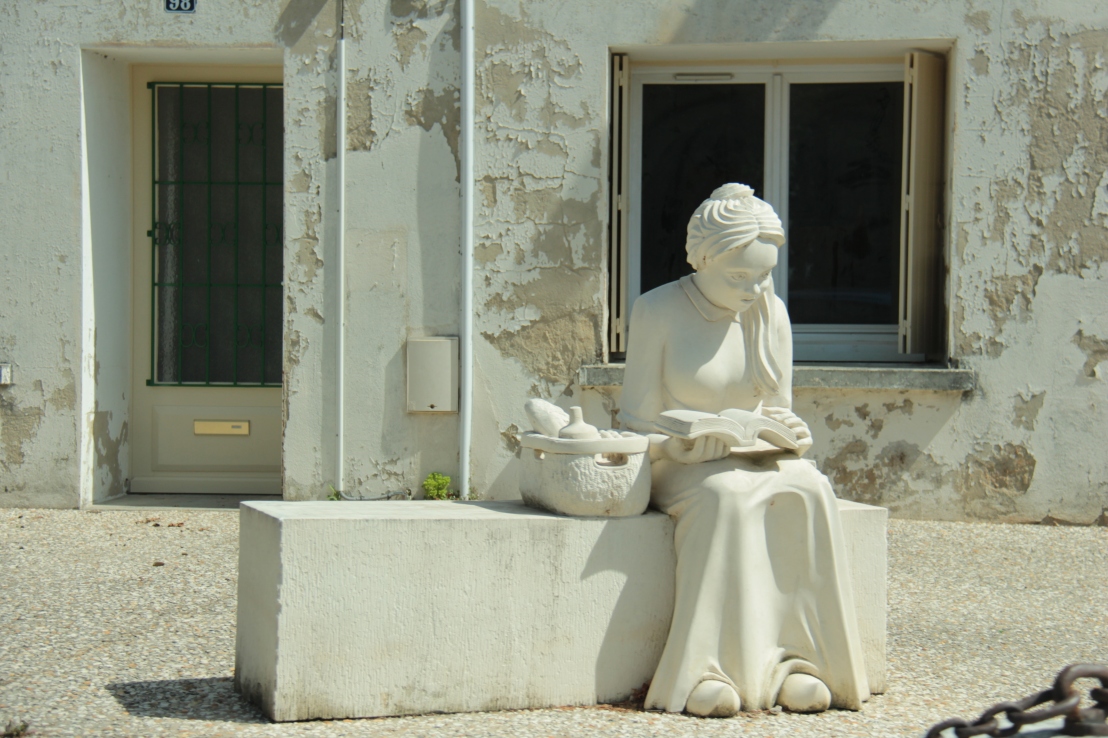 I know it’s Sunday, but it seemed to us that, with so many people in town, it would be great for local businesses to have a few things open – a cafe or two could have done fantastic business.  We gave up and continued on to Port d’Envoux, which was full of families and hikers – we figured there was some sort of hiking club having an event there were so many of them. 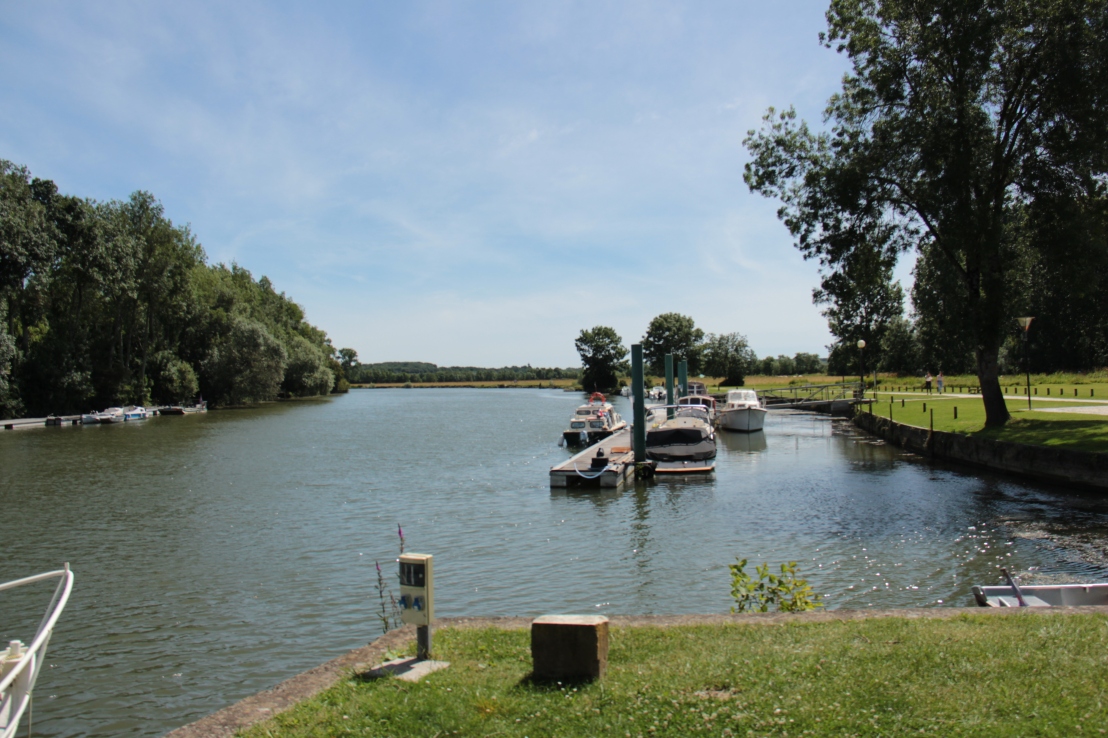 Again – nothing open other than a riverside snack-bar and a couple of restaurants that wouldn’t serve just a coffee or a glass of wine – you must have a full meal.  I suggested that we could mingle in the park where there were some tables set up and pretend to be with one of the families, but I was only kidding (well – kind of…).

In a park there was a memorial to the wars along with several sculptures lining the road.  Astrix is a big local hero – he resisted the Romans but was eventually captured and sent to Rome, where it didn’t end well for him. 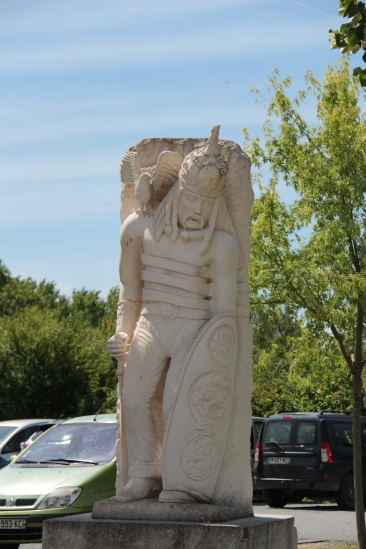 We hopped back in the beemer and drove just a short ways to ‘Les Lapidiales Sculptures’ – wow – just wow.  Many of the sculptures were done on the walls of the hillside, both outside and inside the cave, and there were also free-standing ones. 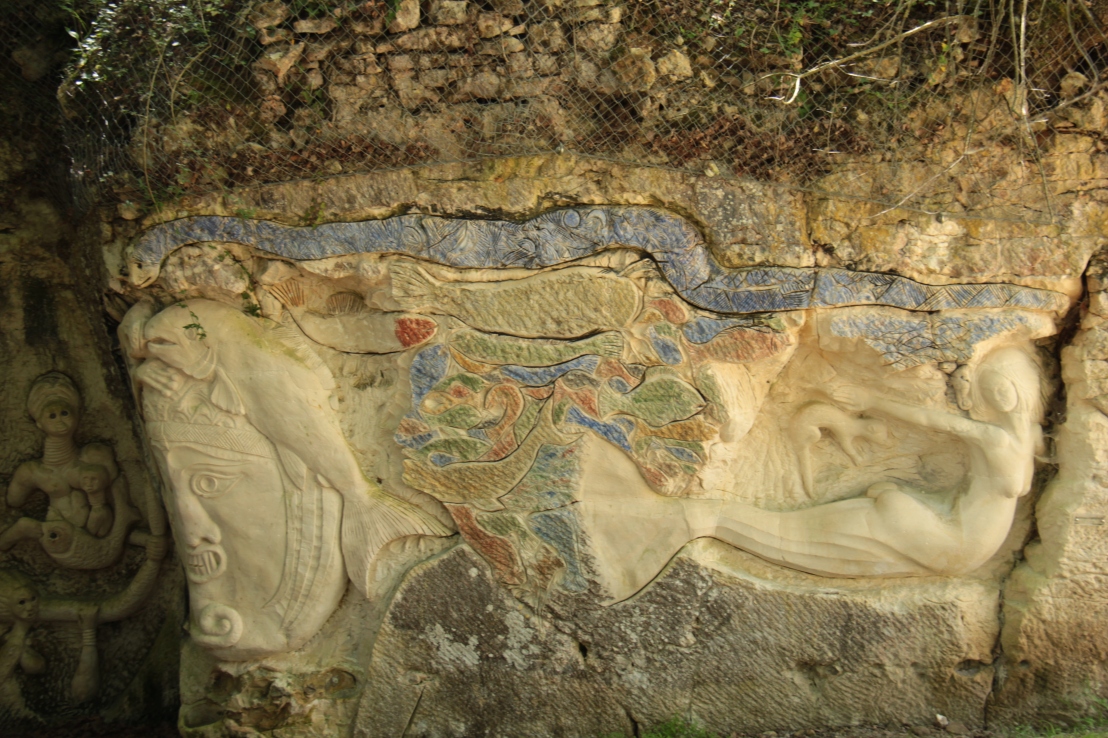 I guess, like any kind of art, it’s subjective, but some of them were rather dismal and depressing, despite the obvious talent it took to make them or story they were portraying.

After spending some time there, we continued on to Saintes, which was a large enough place that we finally found some open cafes, etc.  The Charente River is quite large here, being so much closer to the ocean, and there was a nice promenade with cafes, and boats (for tourists) – even a miniature train that goes around the town. 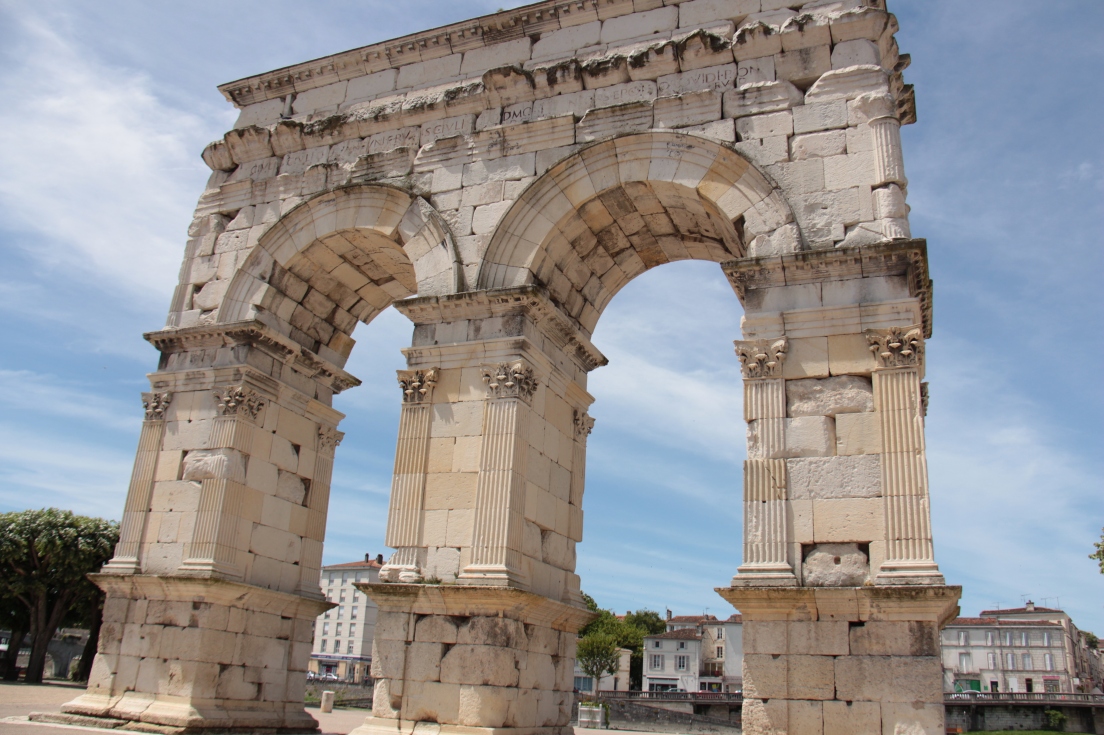 We picked a cafe right across from the old Roman ‘Arc de Triomph’ and sat down, finally, for some beverages and sustenance.  We both had pasta with salmon, which came with a small green salad and a few fries. I especially liked that it was served in bamboo dishes – if you wanted to take it home you just flipped the salad ‘bowl’ on top of the pasta one and it became a lid.

The GPS took us on a completely different route home, but it was equally as beautiful – somewhat flatter than around Mansle, but still very agricultural with fields of barley, sunflower and corn, along with the occasional cow herd.  Along the way we passed a place that had three large teepees in it – some sort of campground, I think.

Before going home we stopped at the local campground bar for a quick drink – the restaurant and bar seemed to be doing a brisk business, even though it was still fairly early.  There was a cricket game being played at the far end of the hippodrome, but we didn’t go to watch.  Went home and had a really nice baked chicken and roast potato dinner.