Another sunny, but windy day – I stayed home in the morning and did yoga with Mo while Colin went out to do some business.  I had a bit of a challenge with the door to the deck when I tried to let Mo out – no matter what I did it wouldn’t open. I thought maybe Colin had locked it when he left and none of the keys on the table would open it.  There was, however, a set of french doors – with the keys in the lock – so I opened the floor-length curtains and got one of those open. I had to lift Mo up and over the flower pot that was sitting outside, but it worked.  I also opened the large window in front of the sink so we had good airflow.

After Mo came in and out again a couple of times I closed the french door.  A little while later I happened to look up above it and noticed that the curtain rod wasn’t even – I climbed up on a chair and saw that part of the left side where it was attached to the wall had come out of the wall and was barely hanging by one screw.  I thought ‘oh no – I’ve gone and broken yet another thing!’.

By the time Colin got back I had kind of forgotten about the curtain rod, although I did notice that he didn’t have to unlock the door to get in.  Later in the afternoon we walked down to the campground bar (the other one is closed on Mondays) for a couple of glasses.

At one point we heard a loud engine coming down the very narrow street towards us and wondered if a big truck was trying to squeeze thru, but it wasn’t a truck it was a tractor pulling a camper, followed shortly by another.  They were so funny looking, and they had come all the way from Germany, judging by the license plates. Not travelling on the autobahns, that’s for sure! 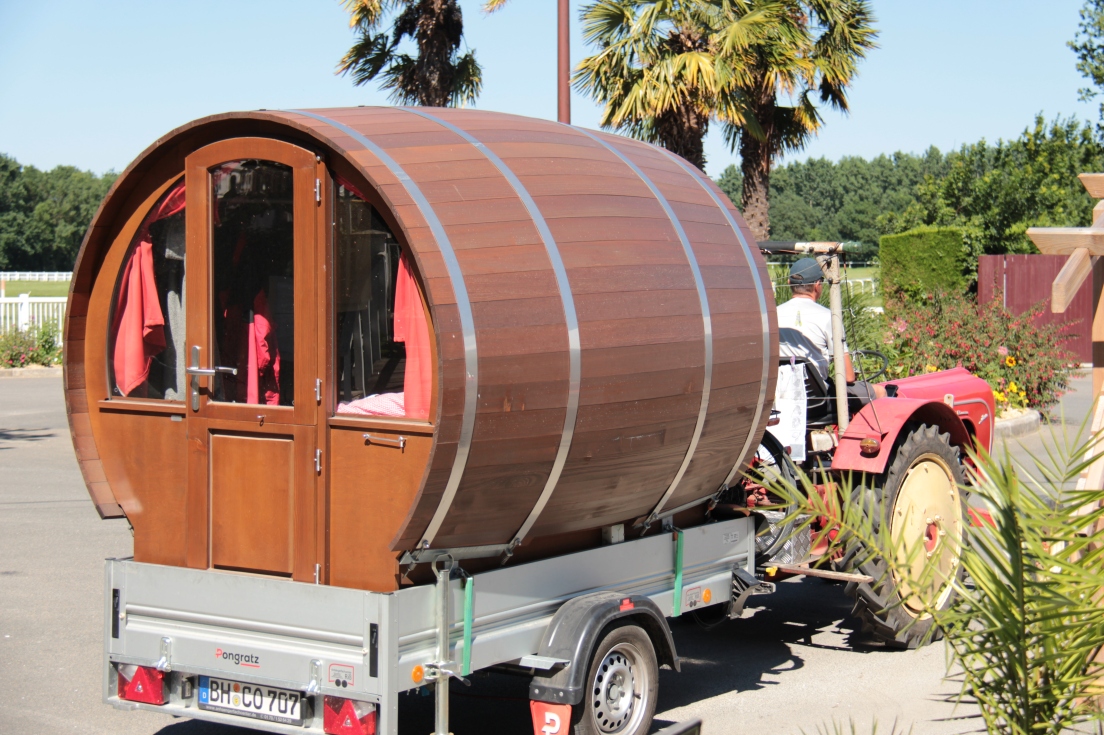 Back at home while I was reading, I noticed Neil fiddling with the curtain rod above the french doors – he was pounding in the top screw on the left side so it would hang straight again.  I asked, casually, if perhaps I had caused it to come down when I opened the curtain, then when I began to tell what had happened I blurted out the whole story about not being able to get the front door open and all.  We all got quite a good laugh out of it – the rod coming loose wasn’t actually my fault – it had happened before, and the door not opening was because the small floor mat had gotten wedged in it and you had to really pull (or push) to move it.

Tuesday morning we went down to the bar for a coffee – I went for a ‘coffee creme’ this time instead of a cappuccino and it was great (once I added some honey from the tiny jar I keep in my camera case).  There were three english couples inside the bar just finishing their morning coffees – we sat down with them and chatted for a bit. I believe I met them last year at the dinner that the bar put on one night.

After coffee we hopped in the beemer and went up to St. Soline to the charity shop again.  Colin donated two beautiful bikes – one a brilliant indigo blue/purple, and the other bright pink.  We picked up a few more books then had a cup of tea. Mo, of course, got the attention of a couple of other folks, who turned out to be british – there are a lot of brits in this area.  We visited with them for awhile, mostly talking about dogs/pets.

In the evening Colin and I walked down to the campground restaurant for dinner – we both got burgers that came with fries and a small salad.  It was pretty good – lots of cheese on the burger, and the fries weren’t greasy. I probably shouldn’t have scarfed the whole thing down but I did – I was so stuffed I could barely move.