Went for another nice little ride with Colin – north to St. Groux, then southwest to Villorioux and on to Cellettes.  On the way we passed a field of sunflowers – someone had made a heart shape in one of the larger ones – it looked pretty cool. 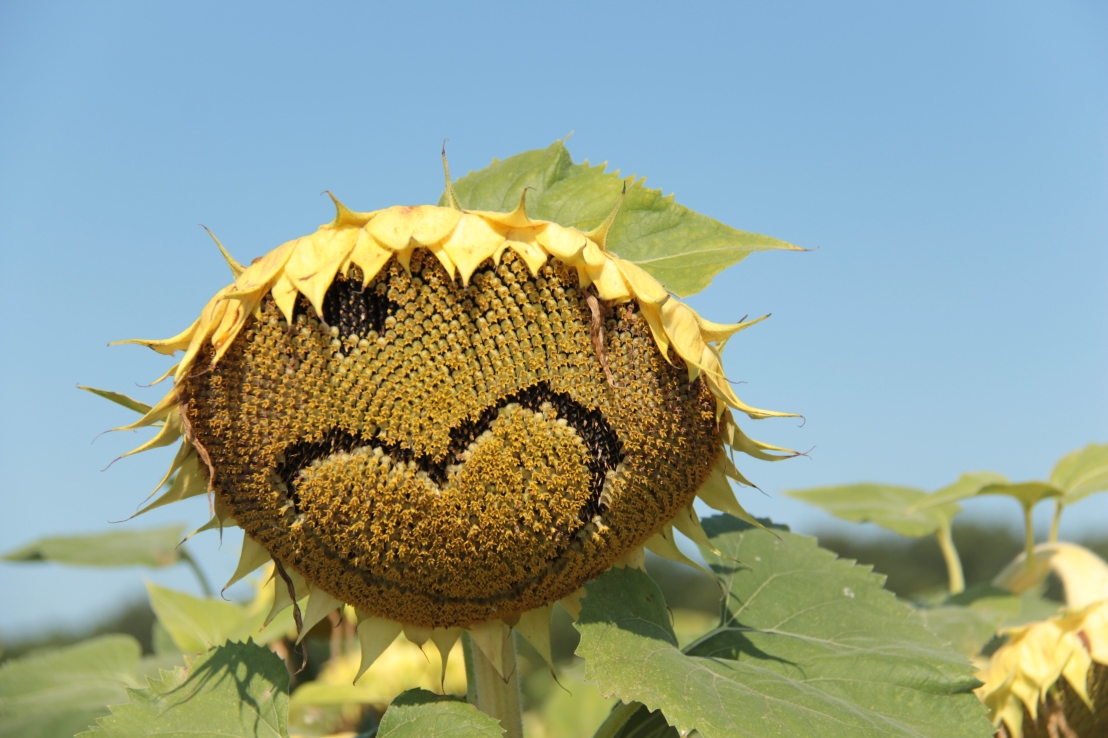 Stopped at the bar again for a coffee – it seemed especially tasty for some reason.  Church across the street got out and the plaza was getting crowded – the bar was busy as they set up tables and chairs in the plaza under the trees.  We figured that maybe there was a christening or something about to happen as more and more folks kept arriving – not just any old church service. 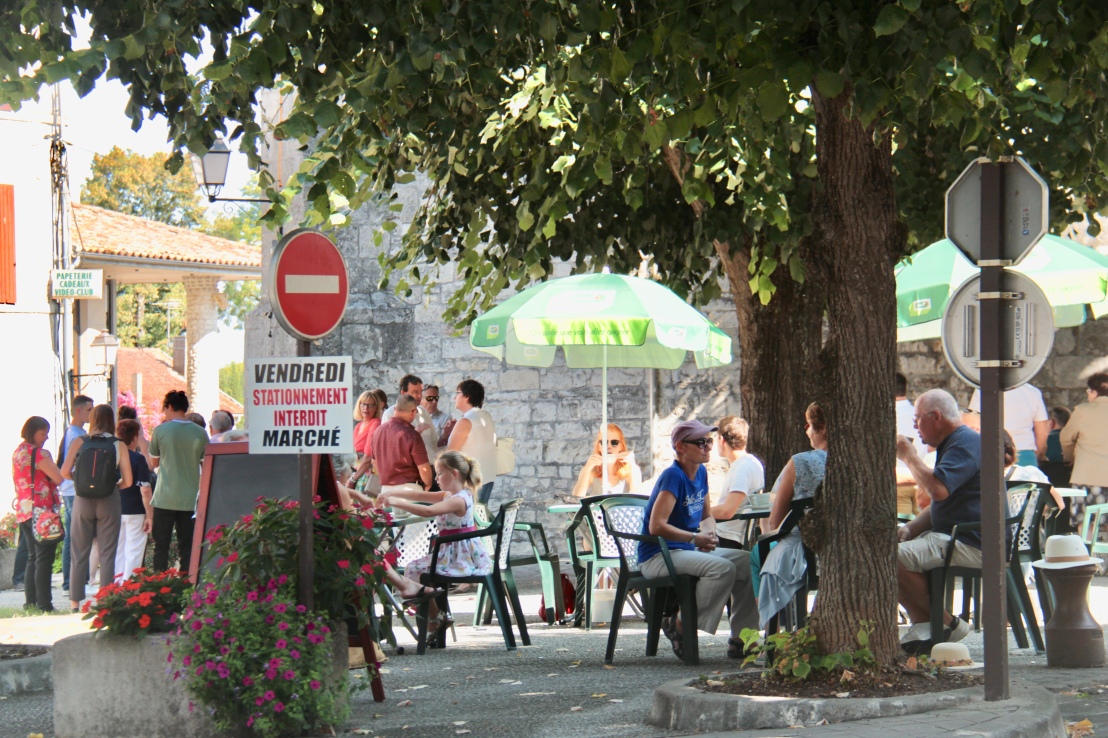 Back at the house Mo had shown her displeasure at being left alone for the 3rd day in a row by leaving a small protest pee.  She thinks she should always be included, so maybe Colin will have to get a basket for her to sit in when he rides.

We each had only a light snack instead of lunch since we planned to get the hot camembert with toast at the campground’s bar before we headed nextdoor to the racetrack.  We walked down and picked a table, only to be told it was reserved – although how we were supposed to know that is beyond me as there was no sign on it or anything. The waiter said it wasn’t a problem, though, and we could stay there.

We placed our order with an older lady and were very surprised when the waiter delivered our plates – we were each presented with a huge ‘hot camembert salad’, which wasn’t what we’d ordered.  He took the plates back to the kitchen and shortly returned them to us, saying we could have them at the same price as the much smaller dishes that we’d asked for.

The salad was pretty good – kind of potato salad on a bed of lettuce, with several slices of prosciutto (or something like it).  Neither of us could finish our salads, but the melted cheese and toast was just as good as we’d remembered from when we’d both gotten it several weeks ago.

We walked over to the track and I was a bit surprised when there was a charge to get in – I did remember though, that we were handed free tickets outside the one in Luxe last month, so I guess it’s not unusual.  Colin paid for me and we went in – the area to the east of the actual track is quite large and has many nice trees for shade. There’s a small grandstand, as well as a fairly large covered eating/drinking area, and of course, several lines for the betting. 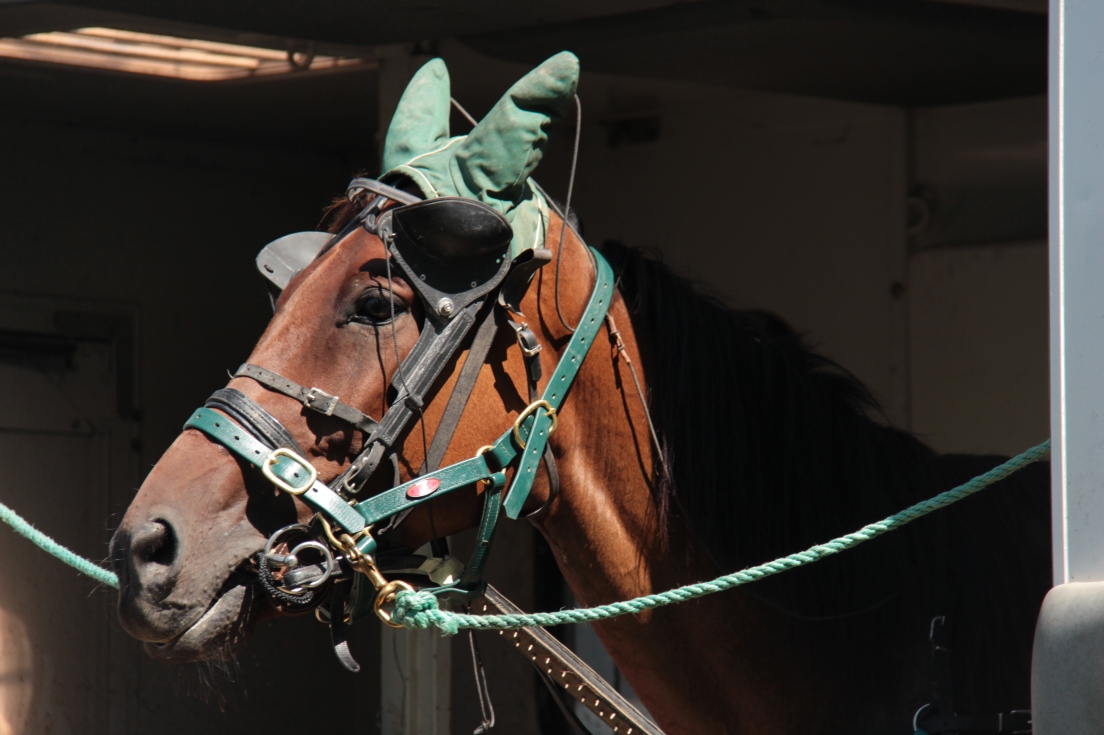 On the other side of a creek is where the horses are – hundreds of them in various stages of getting ready for their races.  It’s lots of fun to just walk around and see what’s involved – some of them were getting hosed down, and others were drinking water from a ‘pool’.

I thought that the different ways folks had of doing the horses tails was very interesting. 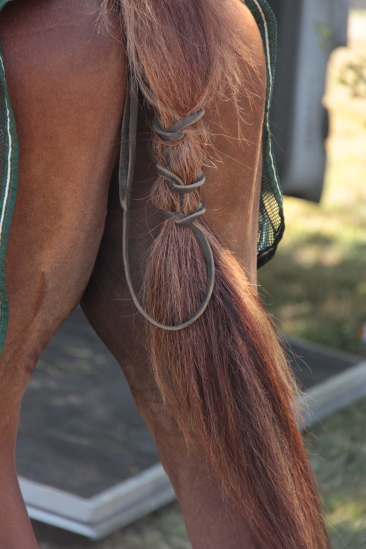 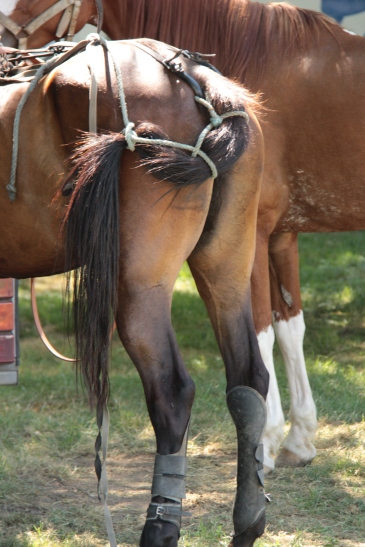 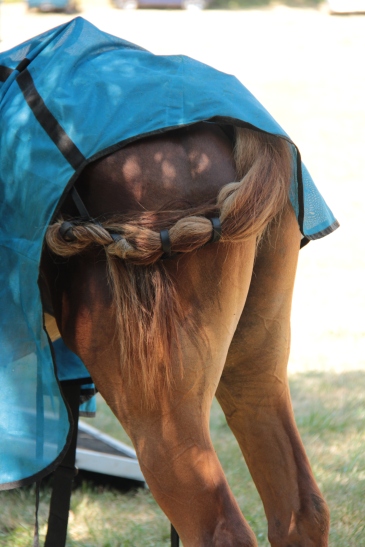 We found a place in the shade in the stands and watched several races.  They were all trotters pulling the carts except for one race that had riders.  I felt sorry for the horses that broke into a gallop as they were disqualified – they just want to run!

There were several female drivers, as well as a few rather chubby ones that we figured would be a disadvantage to the poor horses that had to pull them. 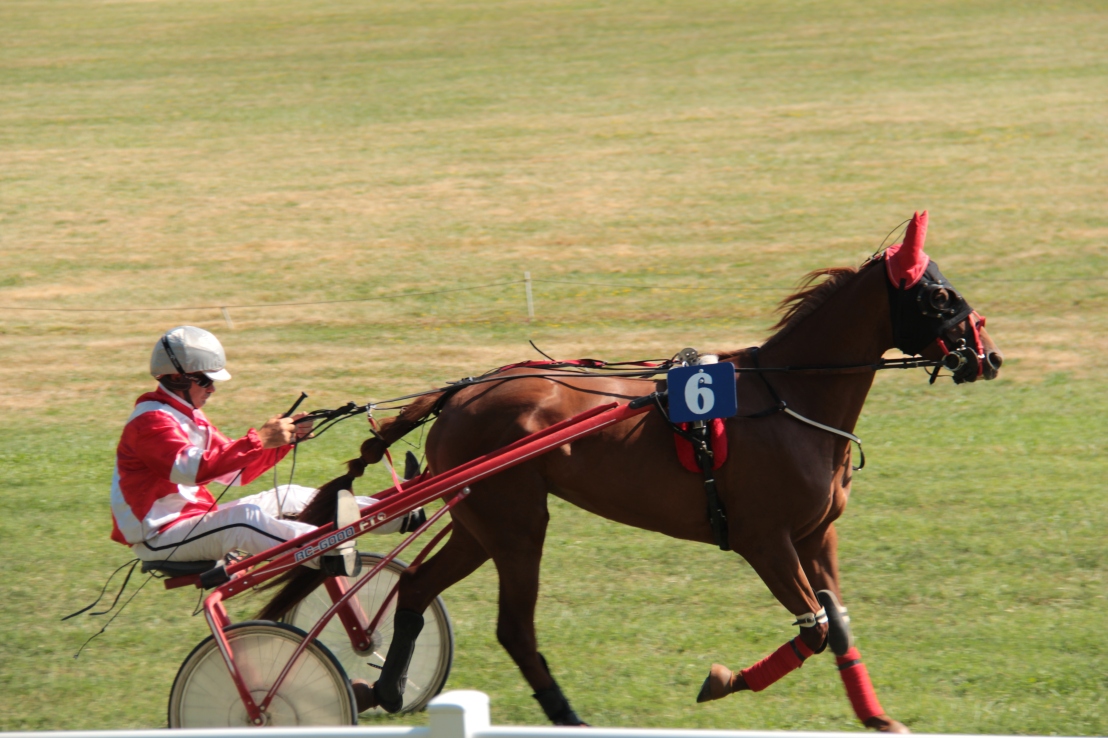 It’s a good thing I wasn’t betting, as most of my picks either bolted into a gallop or were otherwise just slow – the only one I picked that didn’t completely suck came in second in its race.  In one race I picked the horse that had stylish red ear covers, but they came off during the race and ended up hanging on the back of its head. 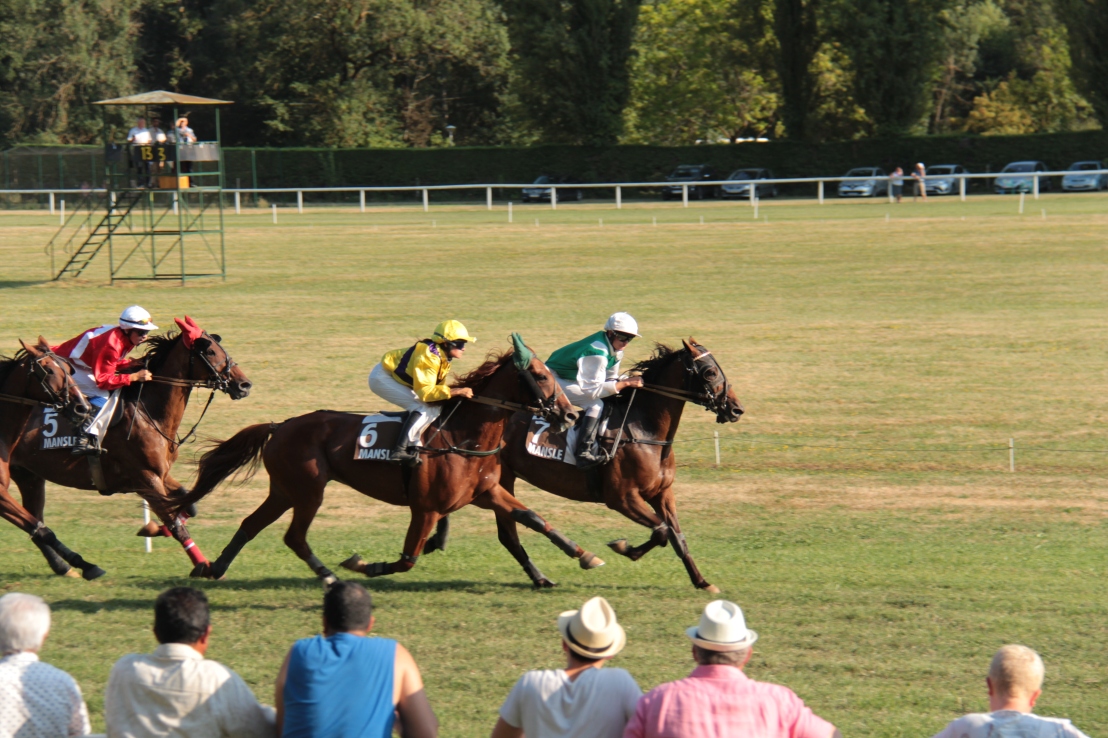 We left just before the last race of the day – there was now a live band playing at the campground. 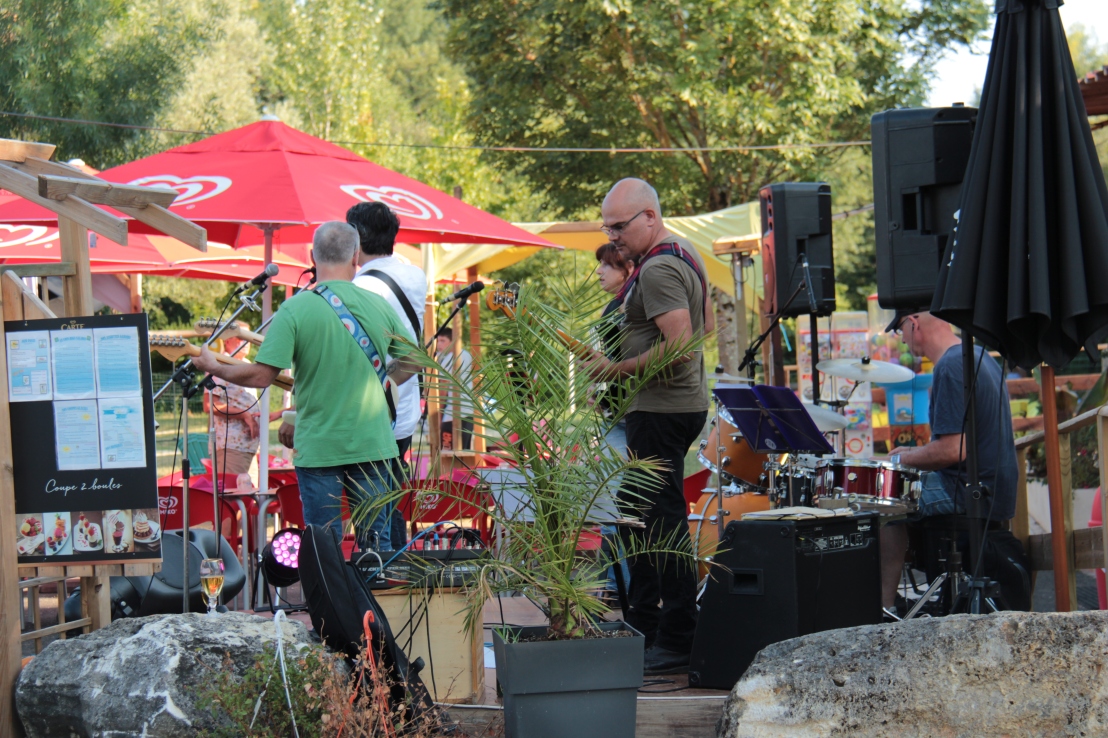 Stopped off at the bar and Neil met us for a drink (or two).  Back at home Colin made roast chicken but we were both still stuffed from lunch so only Neil actually ate any.

2 thoughts on “Sunflower Heart, Off to the Trotters”