Woke up before 7 to the sound of what I thought was another campervan arriving, but it wasn’t – a crew of guys were erecting advertising banners for a sun-glasses company. They were actually very quiet about it, although they did pen in the campervans across the road from us.

A couple of cars had arrived last night and erected a large blue tent at the end of the field we were on, and also towed a port-a-pottie in. We figured it was either a bike-tour or VIP-type place. I made use of the port-a-pottie on my early morning walk.

People started walking along the road around mid-morning, and the young men’s race arrived just after 1:00. They all try to ride on the side of the road if it’s flat – like it is where we are – or else in the very middle of the pave. The pave roads here are very old, and the middle is kind of a hump – the faster you ride on it, the smoother it is, contrary to what you might think. 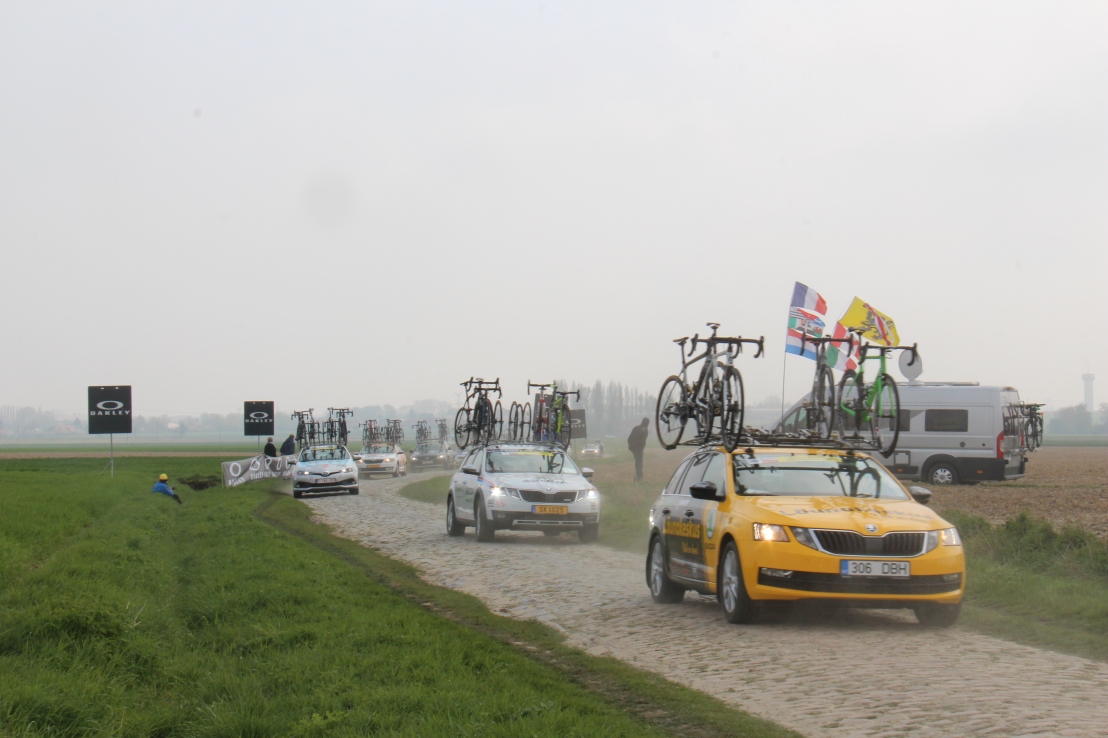 And the cars all try to have one wheel on one side or the other to cut the bumps in half – not sure it really works but they all do it. Many of the moto cops ride standing up – I guess it shakes them up less, although none of the bike riders do it.

There was a small cavalcade at about 3:00 – several cars throwing out hats, candies, newspapers, etc.

The racers arrived just before 4:00 – there were two in front, followed by one by himself, then a small group led by Sagan (last year’s winner). 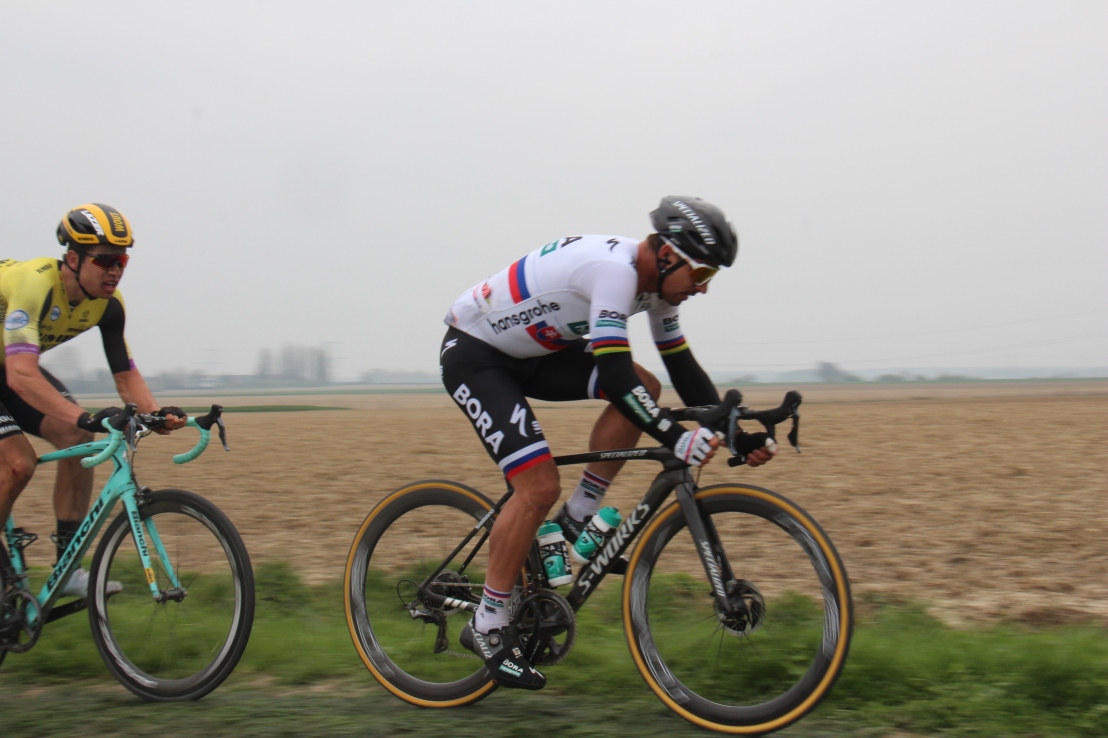 It was quite a while before the last racer passed – we’re on pave section 12, which is actually the 18th section because they count down from the first one, which is 29 and the last one right before the finish is number 1. Anyway by the time they got to us they’d ridden about 180 km and been jolted to bits by 17 sections of pave already.

We’d watched the beginning of the race on tv, and of course watched the end as well. Sagan wasn’t able to repeat as winner, but we were very happy when Gilbert, a Belgian, sprinted across the line in first place.

The folks at the end of the field poured out of their large tent and were partying as we went for a walk to the end of our road. Being the sociable person that I am – and always a bit nosy – I invited myself over. The tent was larger than it looked – it was filled with chairs and had a very large tv at one end – also a very good heater or two.

They offered me all the beer I could drink, but had no wine at all. Mo got a sausage, and as usual made a lot of friends. Colin and I stayed for a short while chatting to a group of the folks, who were all very nice and spoke very good english. They are all from Gent, and had paid 33 euros each which included a coach ride, all the beer they could drink and all the BBQ sausages and other food they could eat. It sounded like a pretty good deal to me – the only thing better would be wine instead of beer – we are in France, after all. Oh, and at least a couple of them know almost as much about politics in Canada as I do – I think they’re a bit in love with Justin Trudeau, and told me I must vote for him again in the next election.

The organizers were a Gent bike club, and you had to either belong to the club, or know someone who did, to participate. They tried to round everyone up to get on the bus so we walked back to the campervan. I think trying to round them up was a bit like herding cats – it took more than a little time, but they eventually got away. Not long after the tent was down, the port-a-pottie was towed away and the site was empty.

We were the only ones that were staying another night – we didn’t want to fight with the traffic and were in no real rush.