After leaving Mansle around 9:00 we arrived at Rochefort at about 10:30. The room wasn’t ready for us as we were early, so we parked the car and went for a walk. The receptionist had given us a map with a few things marked, and we headed first to the market that was setup along Avenue Charles de Gaulle.

It was quite a large market, and most stalls were local produce, cheese and meats – not very many of the ‘made in China’ junk that can be found in some places. 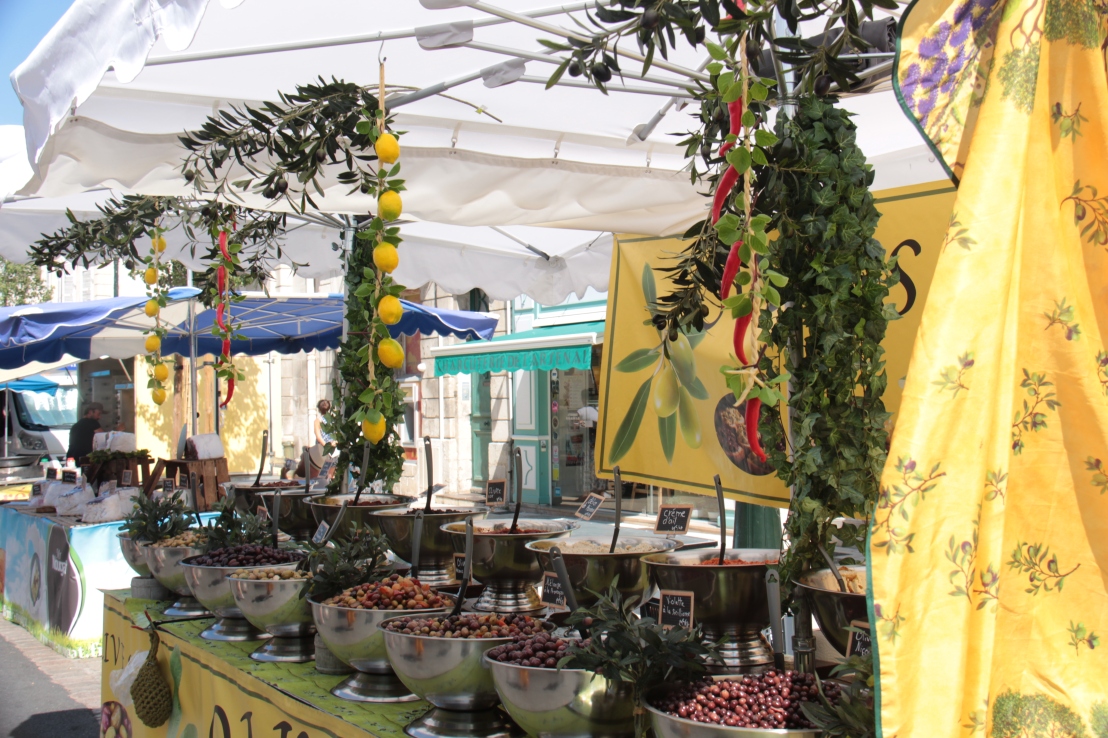 We walked the entire length, stopping along the way so I could get a stylish new sun hat – it has an inner band so it doesn’t scratch my ears, and a chin strap so it won’t get blown off. At the far end of the market we found a nice cafe and had a coffee – it was actually Lavazzo – an excellent Italian brand. 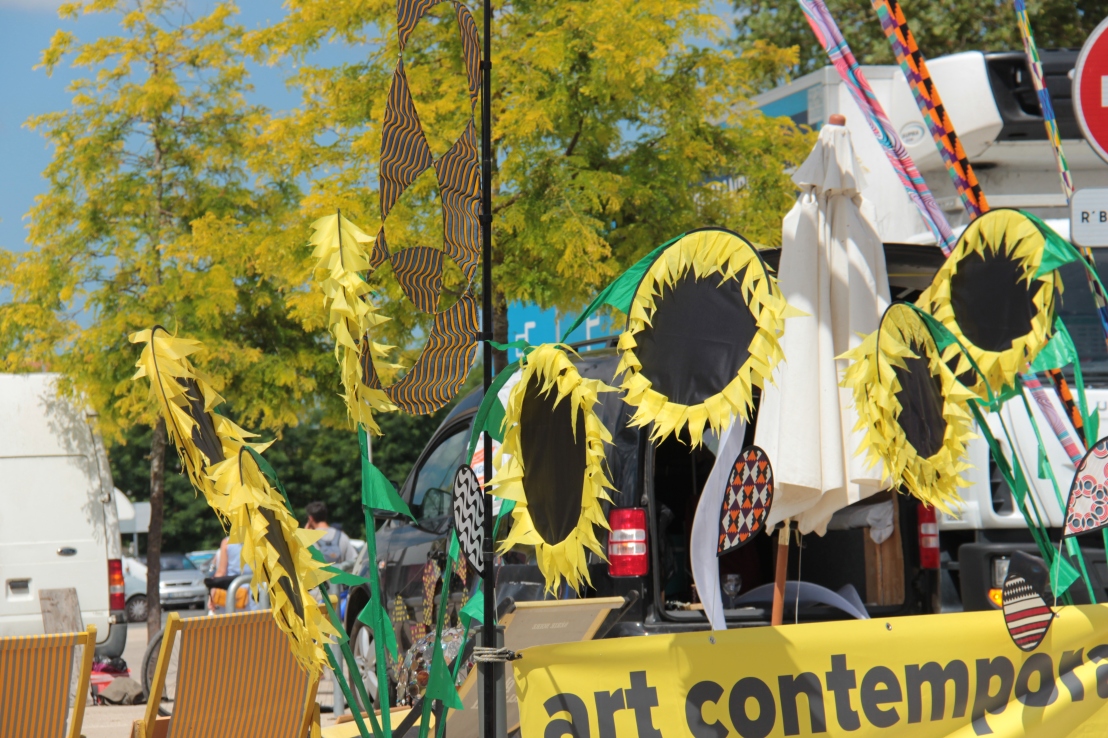 On the way back to the hotel we went down to the river and saw the Hermione – a replica of the frigate that was sailed by general La Fayette to America in 1780 to assist in dislodging the British.

There’s another ship there as well, and this one is a ‘climbing attraction’ – they attach a rope to you and you get to clamber around on rope ladders, etc. The kids looked like they were enjoying themselves a lot. 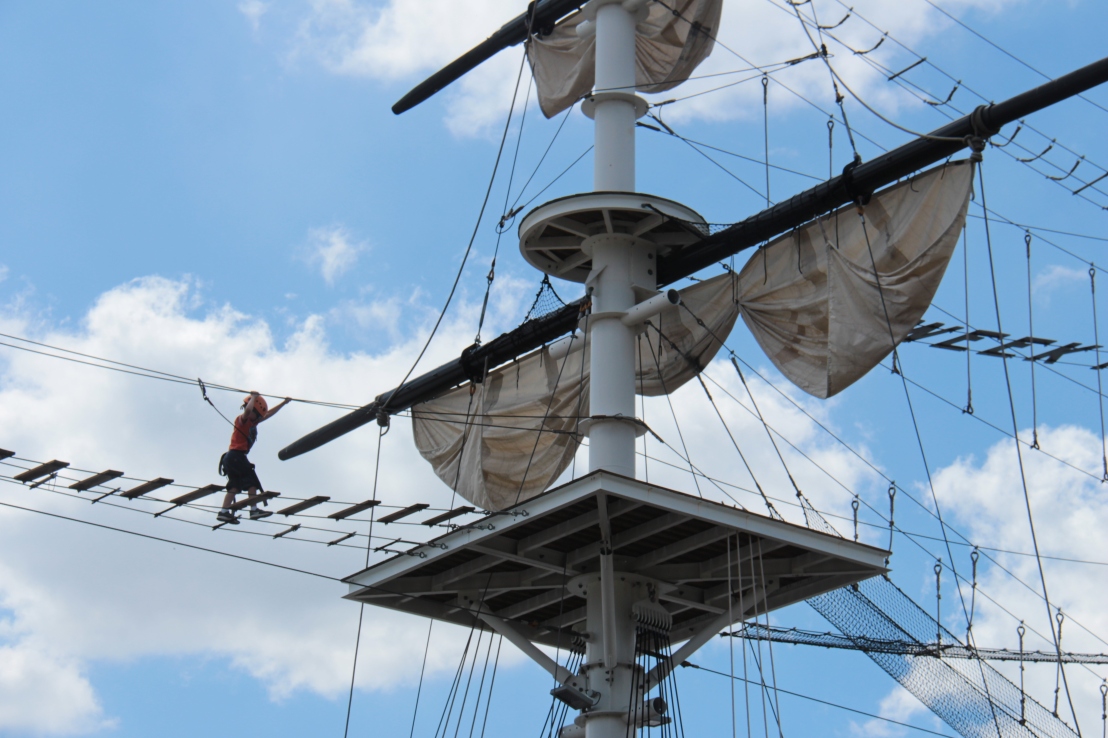 We wanted to walk along the river back to the hotel but all paths were blocked – they’re setting up barricades in preparation for festivities tonight in honour of Bastille Day. It’s actually the River Charente, which, as is passes through Mansle, isn’t that large, but here in Rochfort is very wide – also very muddy from the effects of the tide. 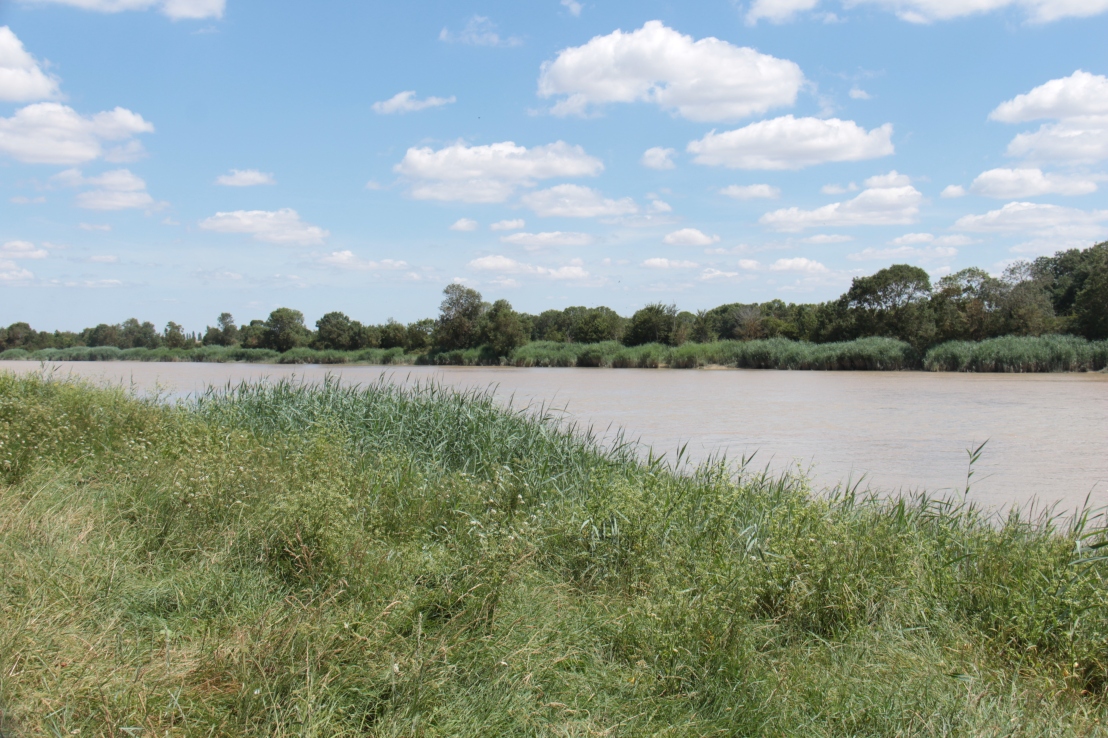 When we finally made it back to the hotel the room was ready so we checked in and watched the day’s Tour stage on tv. We hadn’t had lunch but snacked just a bit before heading out for dinner. We walked back to the area where the market had been and chose an outside table at a nice-looking restaurant. I started with an appy plate that was excellent – several different tapas in a slightly vietnamese style. For my main dish I had chicken on a bed of mashed potatoes – also very tasty.

After eating we wandered back to the large park where some of the festivities are happening. There were food booths and tables setup in a large courtyard in front of a stage so we sat down and listened to a live band. The four fellows looked fairly young, and they played some pretty good music.

There was going to be fireworks, but we didn’t stay for them – I’d been wearing my contacts all day and I’m not used to them anymore as I usually wear my glasses/sunglasses instead. As we left the area more and more people were arriving to watch the display, but we continued back to the hotel.

I was still up reading when the fireworks started – Mo was dozing on Colin’s bed and made a few half-hearted barks at the noise but wasn’t really serious about it. She jumped between the two beds a couple of times during the night, spending about half of it snuggled under my left arm. I still miss my kitties very much and I think Mo knows it so she offers comfort when possible.