Race day dawned bright and sunny – much different on this mountain top than last year at Jaizkibel. Had a nice hot shower, then took a walk down the hill just a bit to see where the race was actually passing and pick a watching spot. 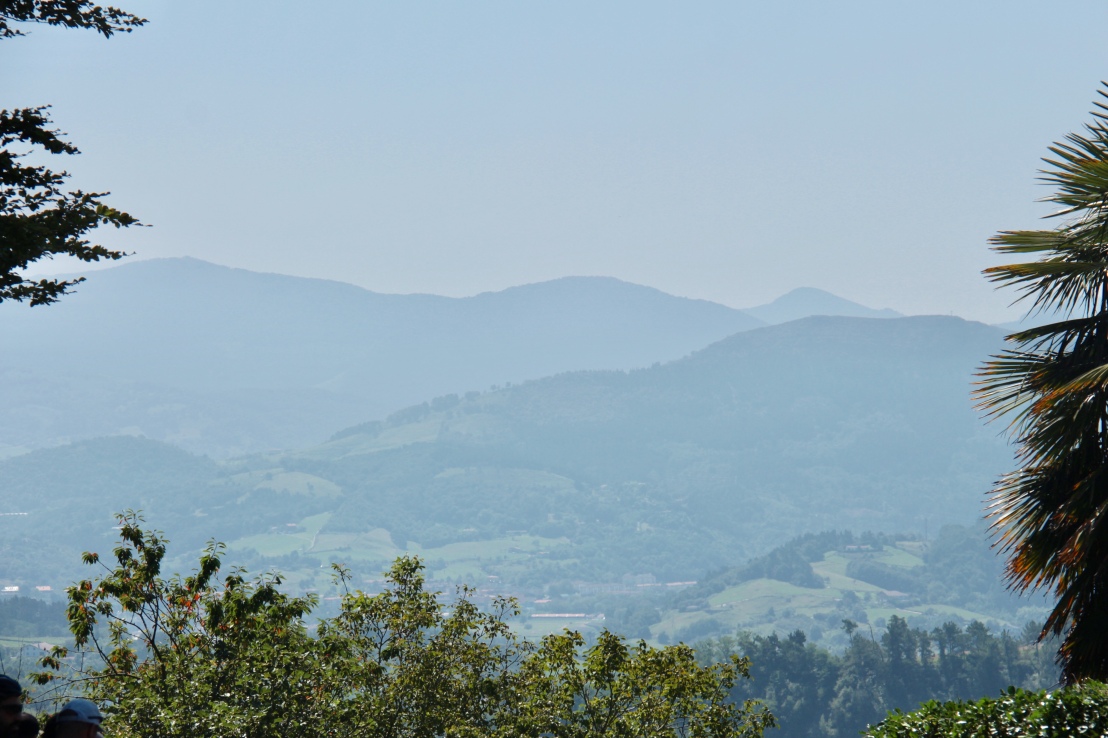 There was a nice female cop – Colin joked that she was perhaps Swedish as she was blonde and spoke very good English – she told us the women’s race would pass by coming up the hill and turning left around 11:00, then on the second time around would turn right and have 8 km left to go to Donostia/San Sebastian.

Since it was already about 10:30 we went back to the campervan to collect our stuff, including the nifty little camping stools we’d picked up in Cognac, then went back to choose our spots.

Colin and Mo ended up on a hillside just before the top of the climb, while I chose to park myself right at the spot where they turn either left or right. For the longest time I was the only one there – at one point one of the course marshalls came and spoke to me. He’d been at the Jaizkibel climb last year and remembered me because I’d been blown over backwards by the barrier when all of the cars passed the first time! 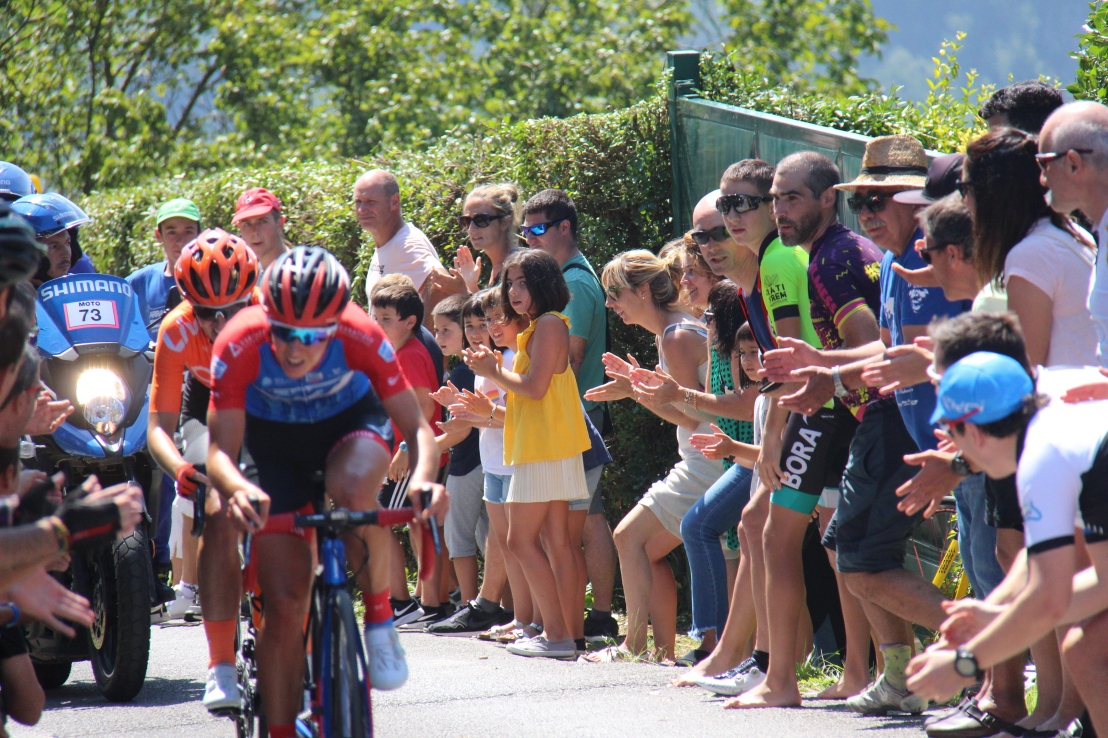 The ladies didn’t actually reach us until just before 1:00, and after they’d passed the first time I went back to the campervan and collected the umbrellas for shade, as well as some food – all very appreciated by Colin and Mo. 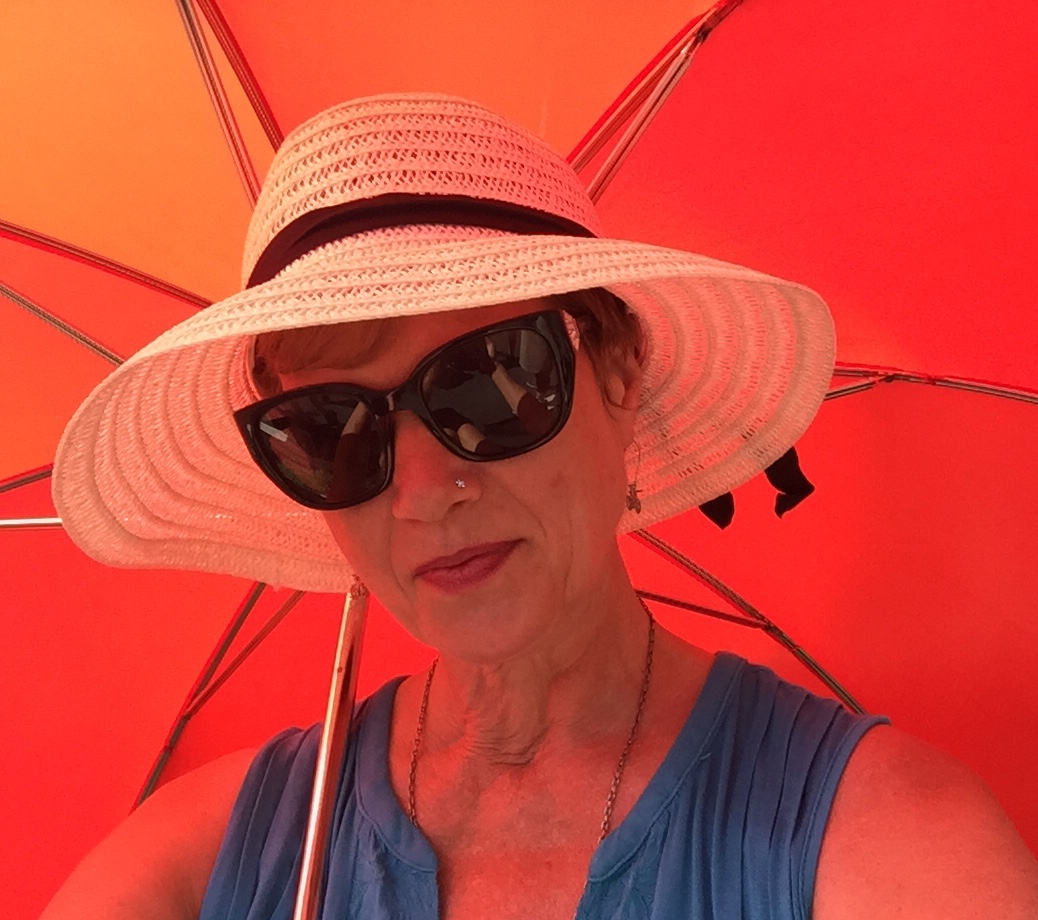 They came around the second time at 1:44 and I must say I was very impressed by the crowds – although I did have to move from my nice little chair as everyone that had gathered at the last minute all crowded in front of me. A moto with two fat guys on it also parked right in front of me and when I – and a very nice Spanish lady next to me – protested that I’d been there for five hours and had come all the way from Canada he just shook his head and basically said ‘tough shit’ (although in Spanish, of course).

The ‘Swedish’ policewoman had seen this and waved me over to where a very large official photographer had sat down on the road right at the corner – I squatted down behind him, figuring that I’d be safe and cushioned by him if anyone lost their balance on the corner.

After the second pass of the ladies we went back to the campervan and had lunch – this time Colin stayed on the ‘upper level’ where the campervan was while I went back down the road to the same spot I’d been in before – he was actually directly above me.

The first circuit of the men arrived at 4:44 with Movistar in the lead – Valvedere in 3rd position – followed closely by Quickstep. This time I’d moved to the inside corner and the men that were already there didn’t mind at all – they were taller than me and they assured me that I wasn’t in their way. 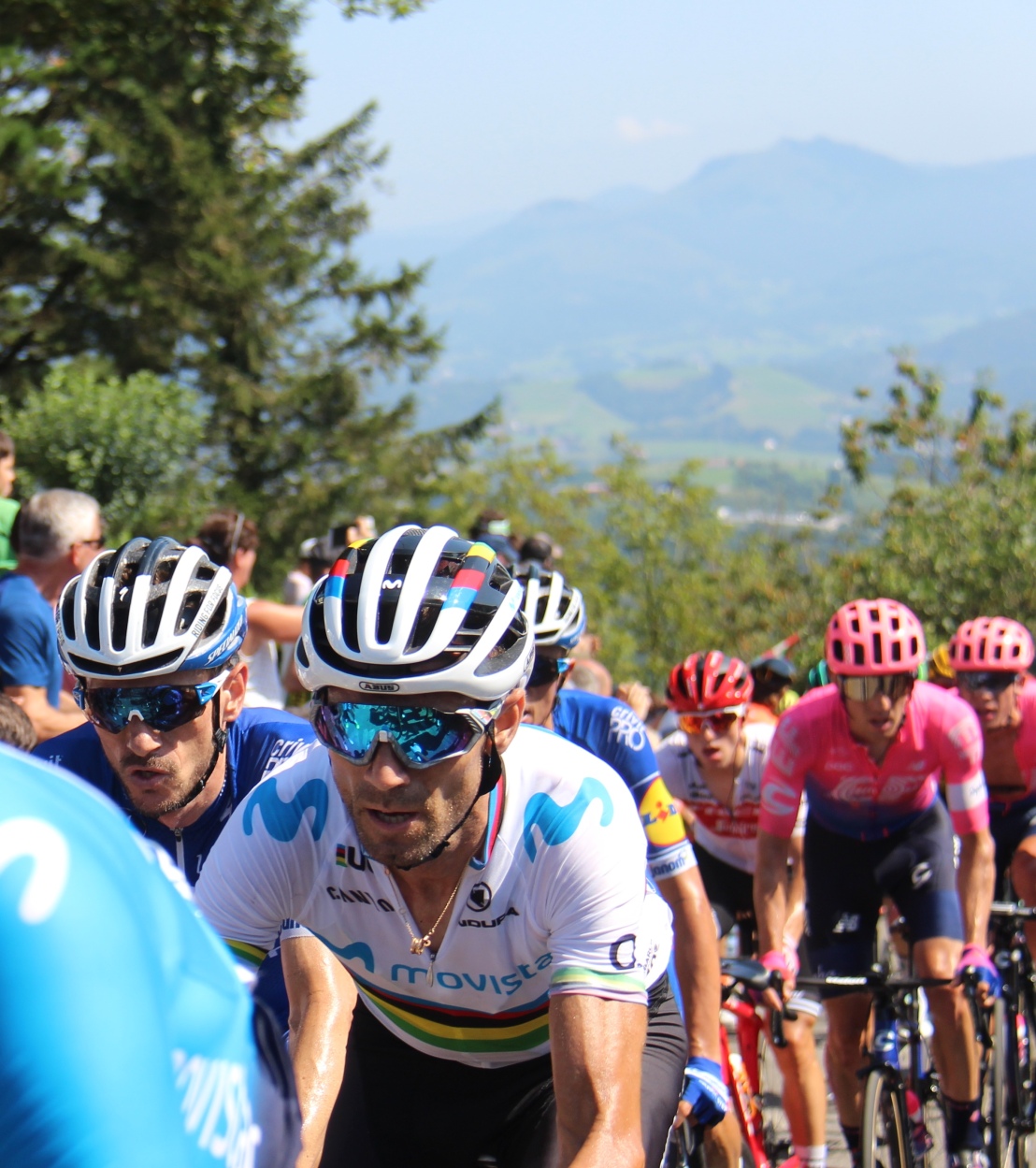 Fourty-five minutes later they arrived on their second pass on the way to the finish – this time young Belgian Remco Evenepoel was by himself in the lead. 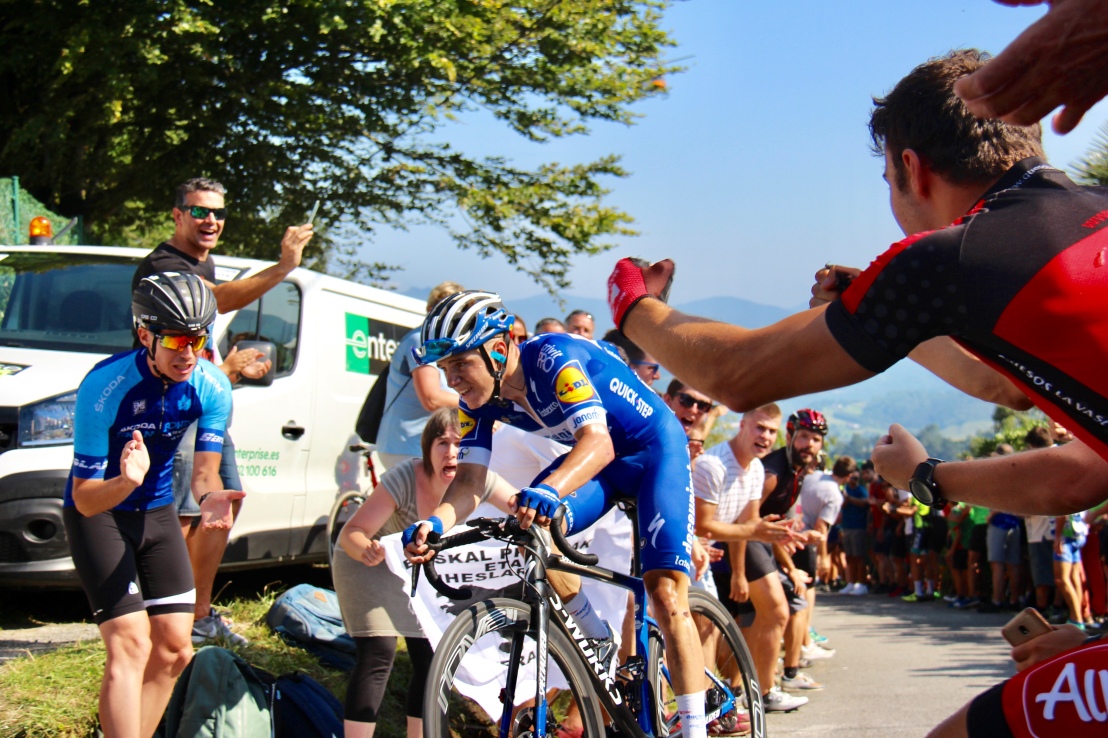 Apparently, as we read later, by the time he was 3 km from the finish he was crying as he realized what a huge feat he was about to accomplish. He’s only 19 and was about to win one of the greatest one-day races of the year – he has a gigantic future ahead of him and is going to be a huge star of the sport. 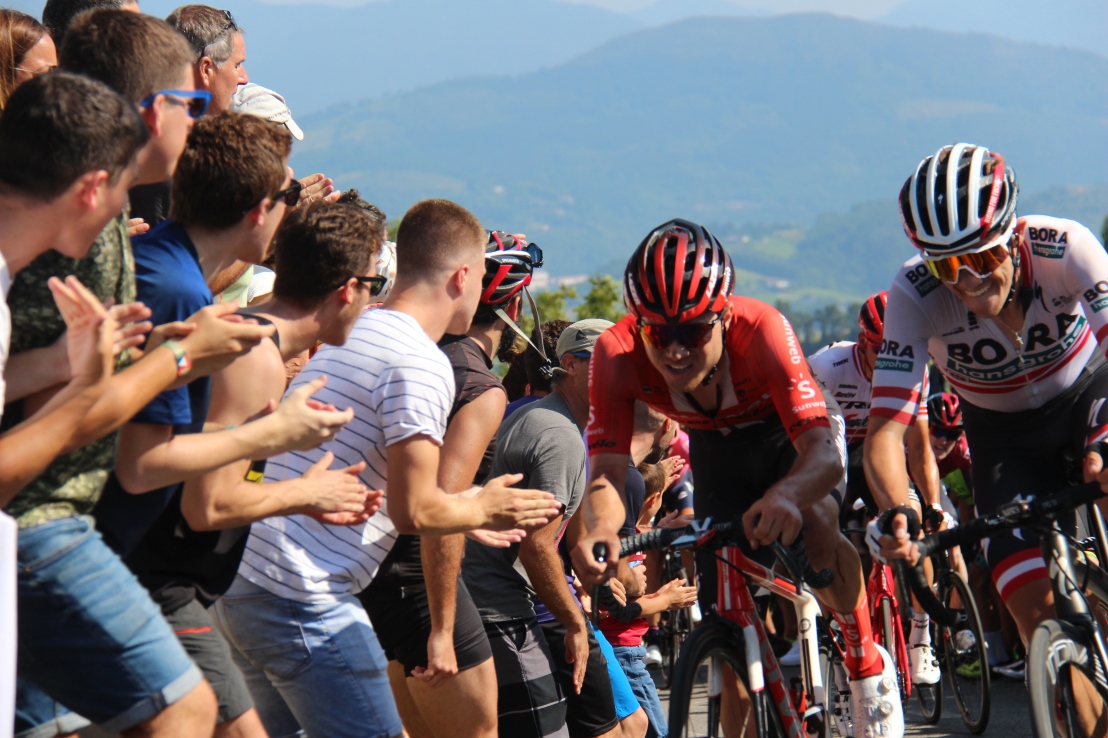 It was a fantastic day of race watching and we were immensely pleased – the crowd was huge and it was super exciting to be at such an excellent spot and among such enthusiastic fans.

We had already packed up so as soon as the race had passed we were on our way. We headed south intending to stop at a campground in a national park not far away but both decided we didn’t care for it so went back down 8 km of switchbacks and parked for the night at a designated ‘aire’ in Altsasu – basically on the street with no facilities, but allowed by the town.