The drive from Pescopennataro to Lago di Campotosto was beautiful.  We stopped in Sulmona for a few groceries, then continued north/northwest, skirting L’Aquila and on deeper into the mountains.

The lake is gorgeous and the campground has a lovely view – we arrived mid-afternoon, so just settled in and relaxed for the rest of the day.  It’s much cooler up in the mountains of course, and I’d actually put my long pants on for the first time in weeks.

The next morning I got on the bike and took a ride around, taking a wrong turn or two.

The first side trip was right up into the centre of the village of Mascioni – all steep, narrow cobbled streets.  Going up was way easier than going down – I made my way down as slowly as possible and did my best to stay upright. 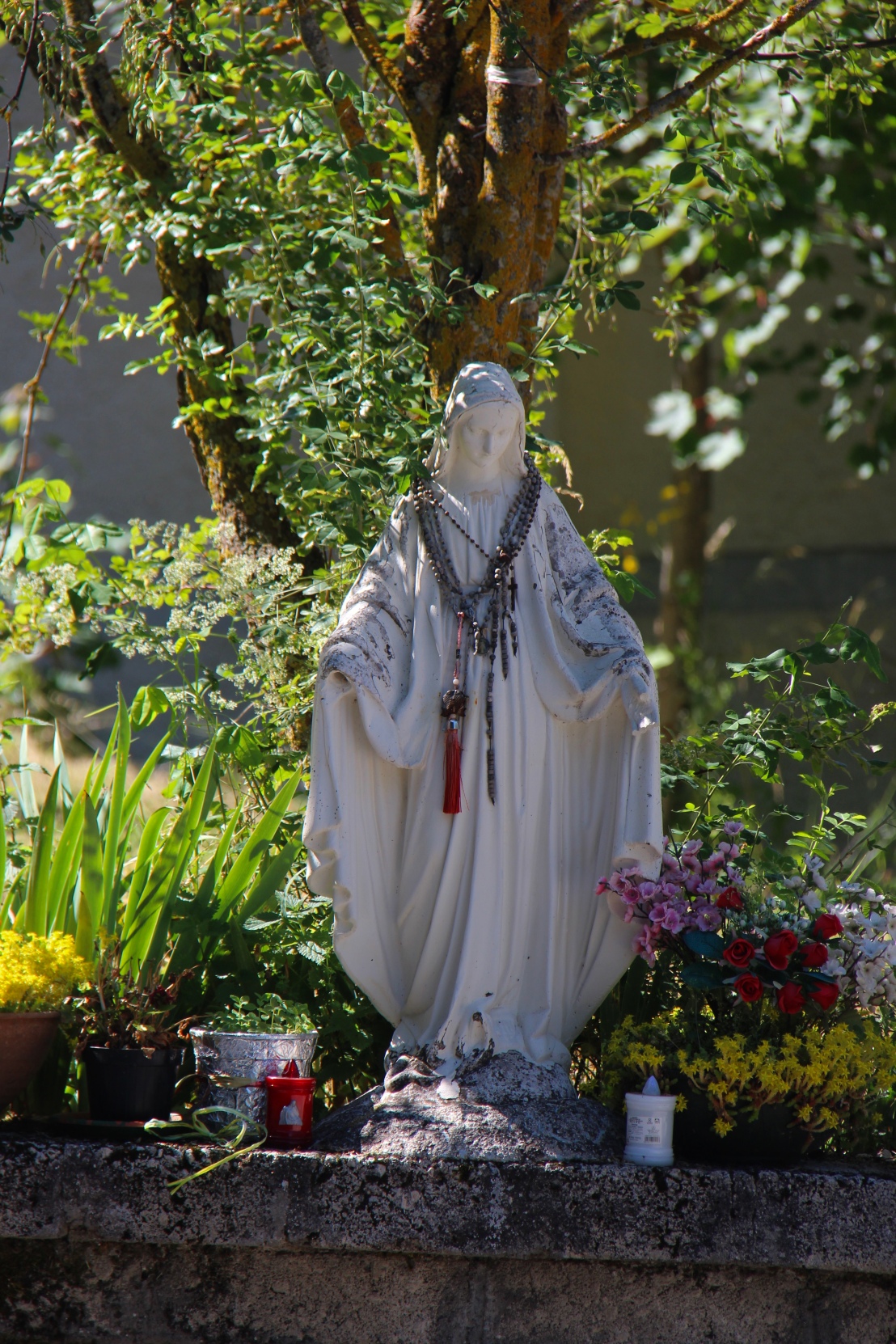 After successfully negotiating the cobbles back down I took another side road that was a dead end.  Back to the main road I ended up going behind the village and up into the hills above.

I thought that if I kept going I might eventually reach another part of the lake, but after quite a ways out I decided to turn back just after I saw a group of beautiful wild horses. Or maybe they weren’t wild, but there were no fences. 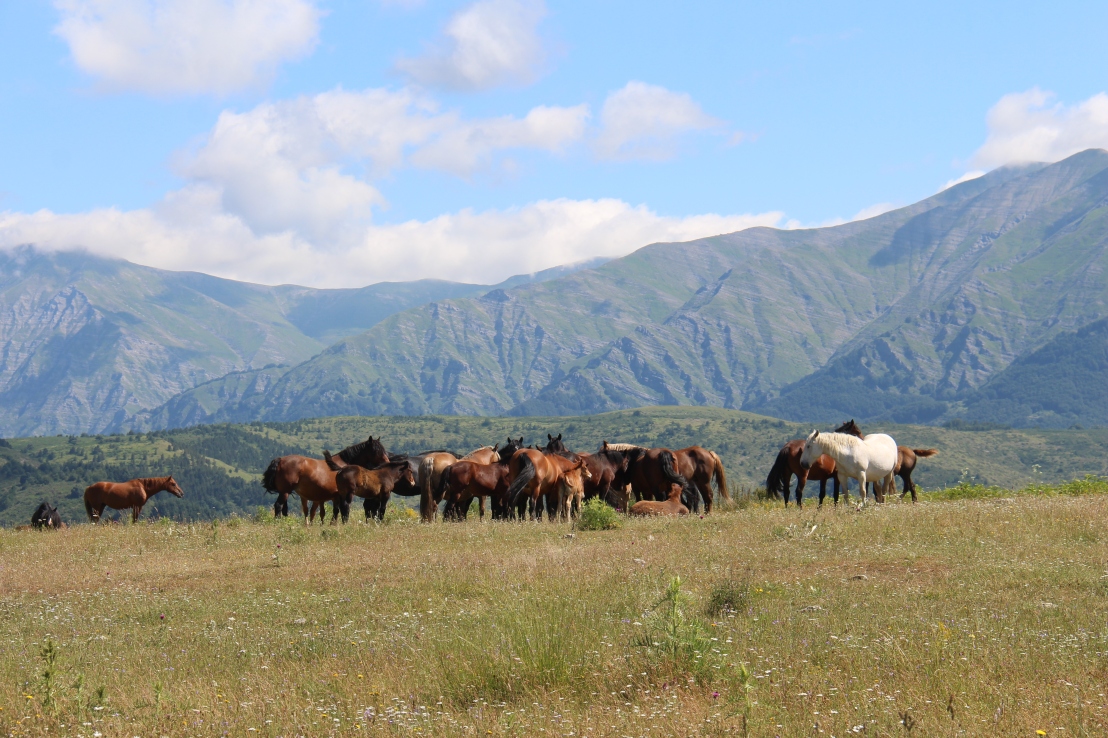 After going back down all the way to the lake I headed along the shore road to the end of the bridge, where there were several campervans parked as well as a cafe/concession stand.

I asked for a cappuccino but the fellow said he was waiting for the milk delivery – could be 10 minutes or so.

I waited for a bit, but realized that if I didn’t get going soon I wouldn’t be able to make myself move, so left without my caffeine jolt.

The ride back to the campground wasn’t difficult until the last several hundred meters – even with max assistance I had to work very hard to make it up – dodging a couple of walkers and a dog (nice dog – not on a leash but very well behaved).

Upon reaching the campervan at the top level of the terraced campground I saw two other riders about to leave – I panted ‘even with the assistance its hard work!’ and the guy answered me in english.  He’s in fact from Ireland and his lady friend is from Perugia – Colin joined us for a nice chat before they went on their ride. 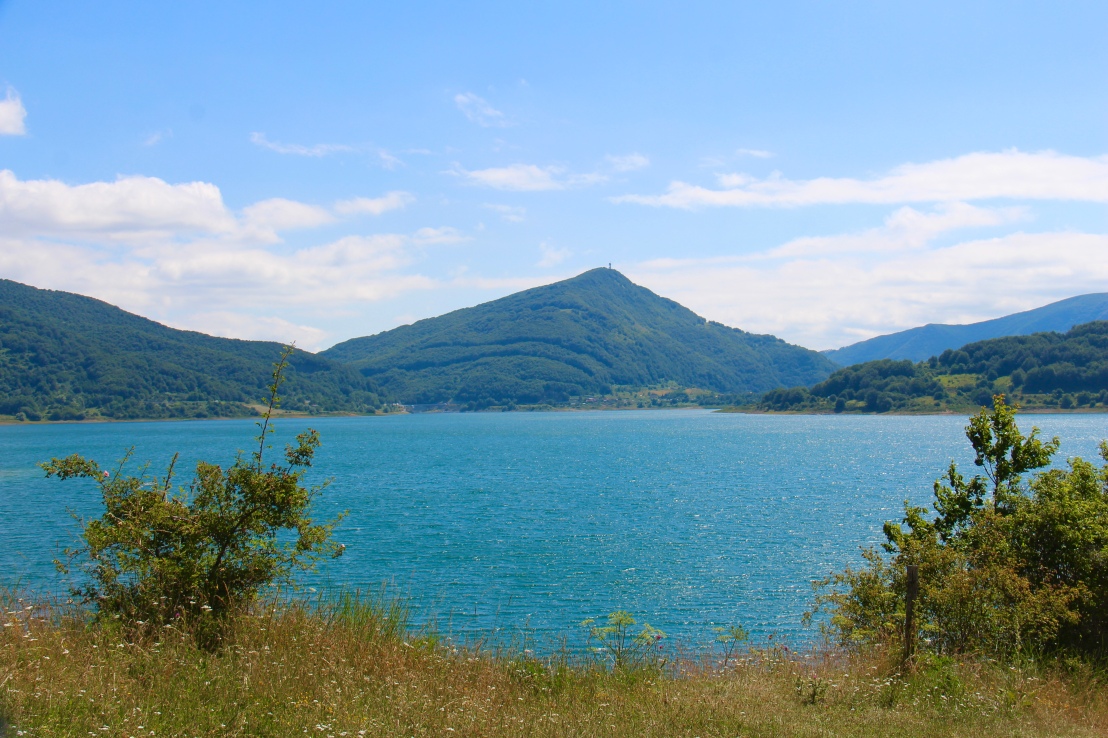 We had pre-arranged to have lunch in the campground’s restaurant and it was very good.  A really nice antipasto consisting of beans, cheeses and meats, followed by a primo of spaghetti with ragu.  We passed on the secondo, although we could smell it and were tempted, but too full.

I don’t take too many ‘selfies’ but couldn’t resist the stunning location – here I am with a little longer hair, bathed in morning sunbeams.