After the Strade Bianche and having cleared Siena we didn’t go too far before stopping at a campground for the night.  It was in a very nice area and I got to have a refreshing, although not hot shower. 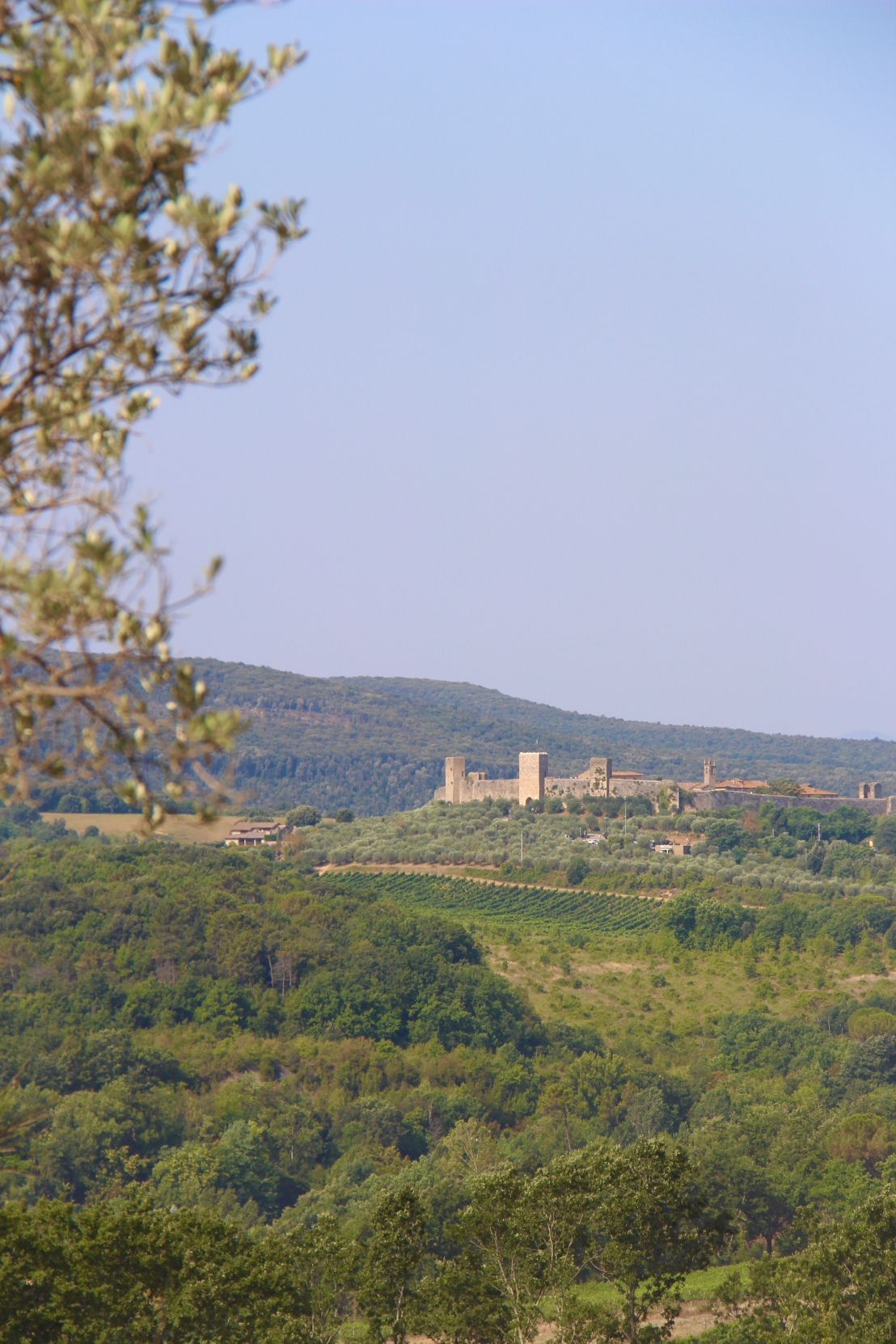 There was a lovely swimming pool just outside a large, very crowded restaurant.  I made use of the free wi-fi for a bit, then had a fairly early night.  Thankfully it was a bit cooler than the previous couple of evenings had been. 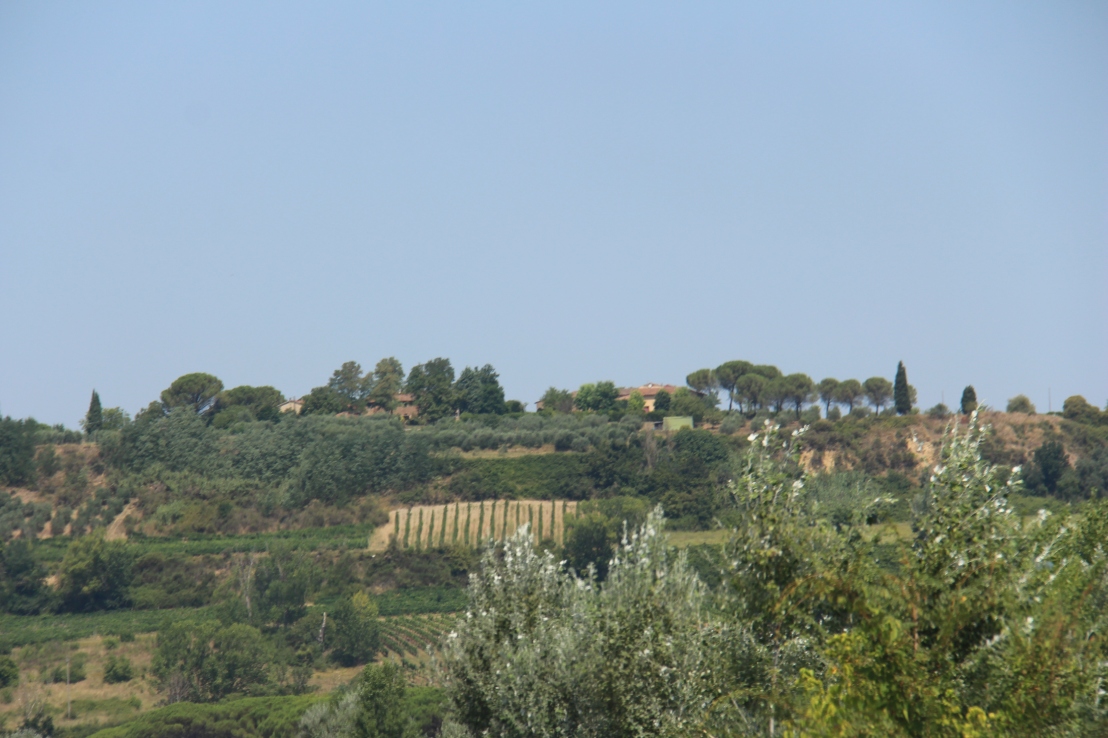 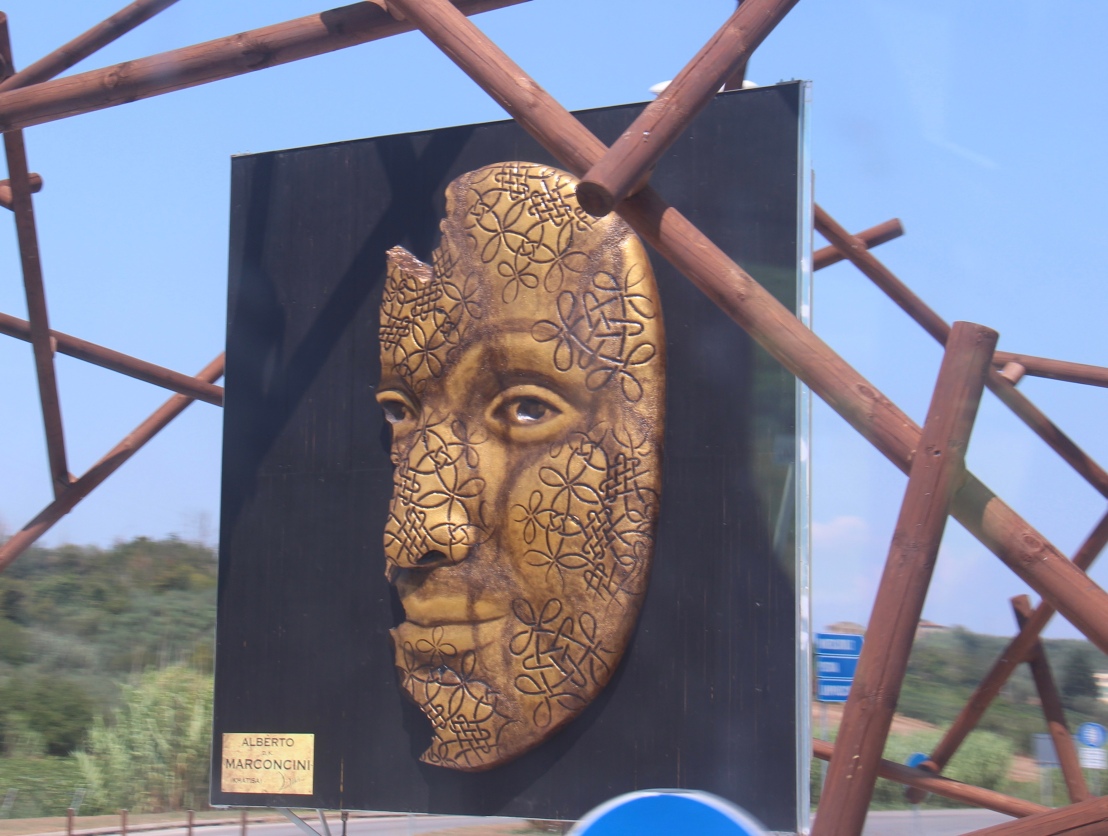 The next day’s travel was almost across the Apennines to a campground we’d stayed at two years ago just outside the village of Zocca.  This time we didn’t have quite as frustrating a time finding it, although the gps was, once again, not totally accurate.

The old dog is still there, but is moving a bit more slowly.

We pre-ordered dinner, and were both very pleased.  I think it’s the same chef who was very new to the place two years ago, and they still have a lovely organic garden for many of the meal’s ingredients. 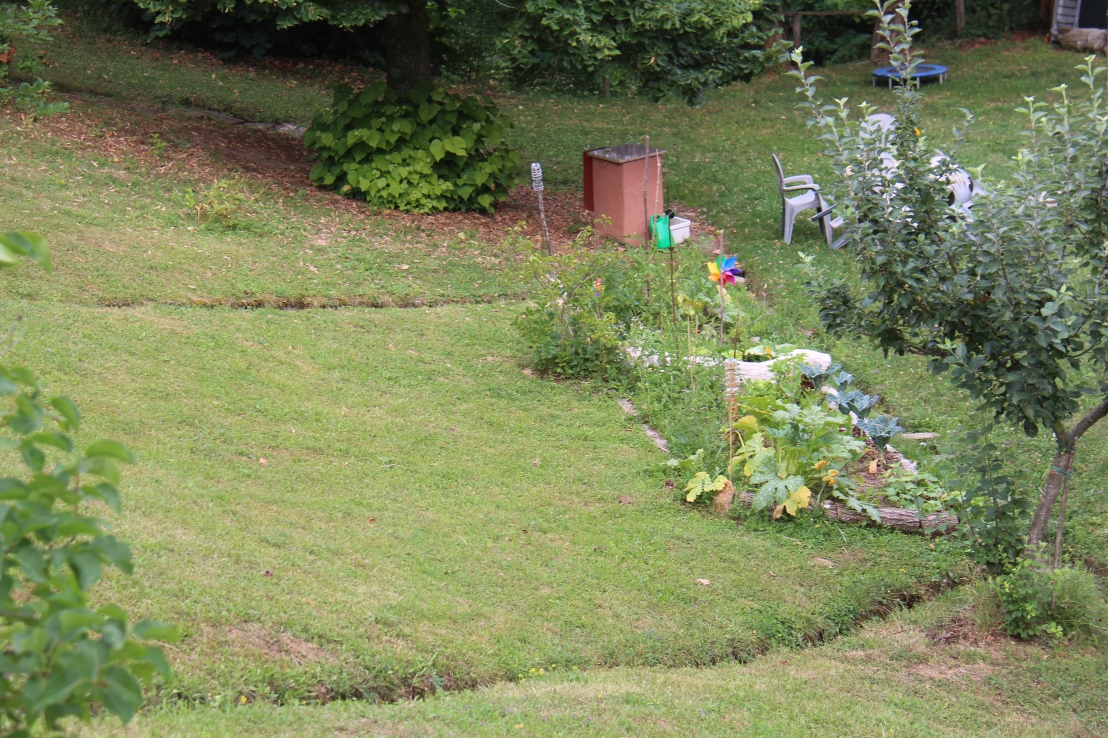 My lasagna was obviously handmade, and was delicious – no meat or tomatoes, but zuchinni and cream sauce – very nice, and just the right amount.

After only one night we were on our way again, this time taking the paege to make better time – although at times we were barely moving because of roadworks and on/off ramp backups at every large city we passed.

We eventually settled for the night in the nice large, flat parking lot of a cemetery at the edge of the town of Conzano, not too far northwest of Alessandria  It was very quiet and much cooler – we had a lovely dinner of salmon teriyaki and another early night.

When I went to bed Mo was full across my pillow – as I tried to nudge her over she growled and snapped at me!  After mollifying her and almost falling asleep we were kept awake by a prolonged lightening and thunder storm.

The lightening would flash, then it took forever for the thunder to hit, but when it did it went all around and on and on.  Mo got a bit excited barking to scare it away, but one of the last rolls was so powerful it actually shook the campervan.

Before leaving Conzano the next morning we had a nice walk around the village.

There’s an art exhibit all summer and the artworks are all over the place – it was very different and made for an interesting morning. 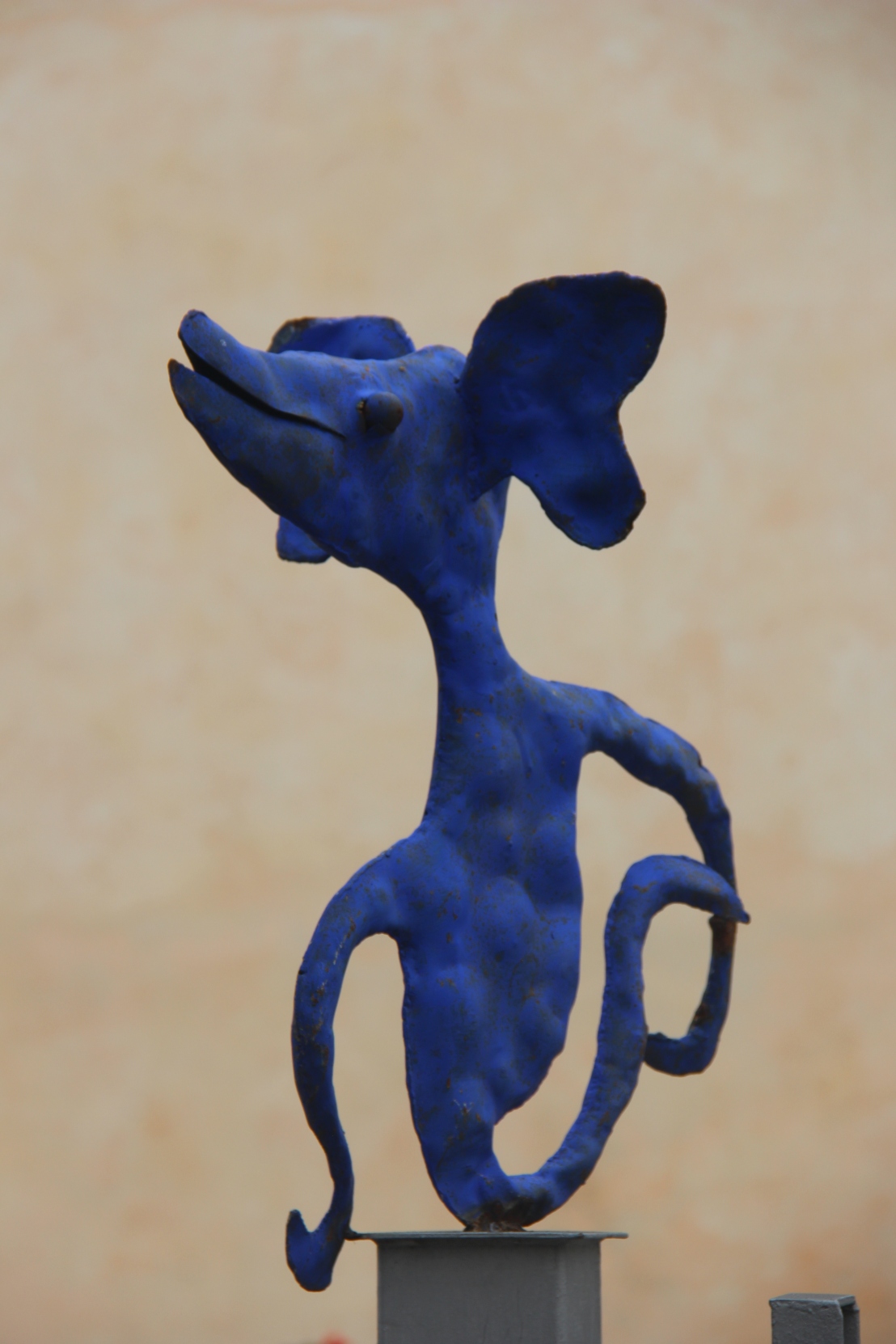 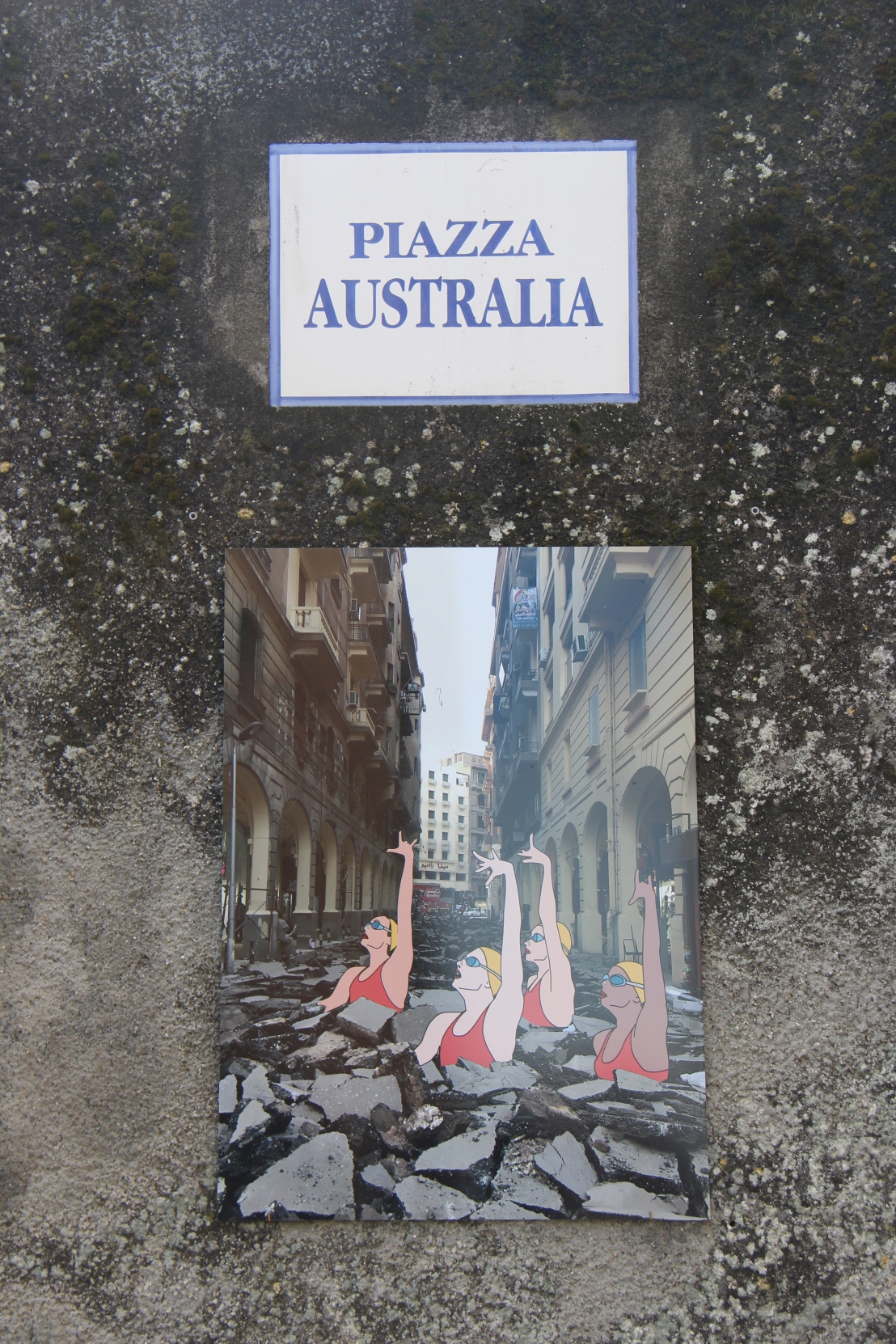 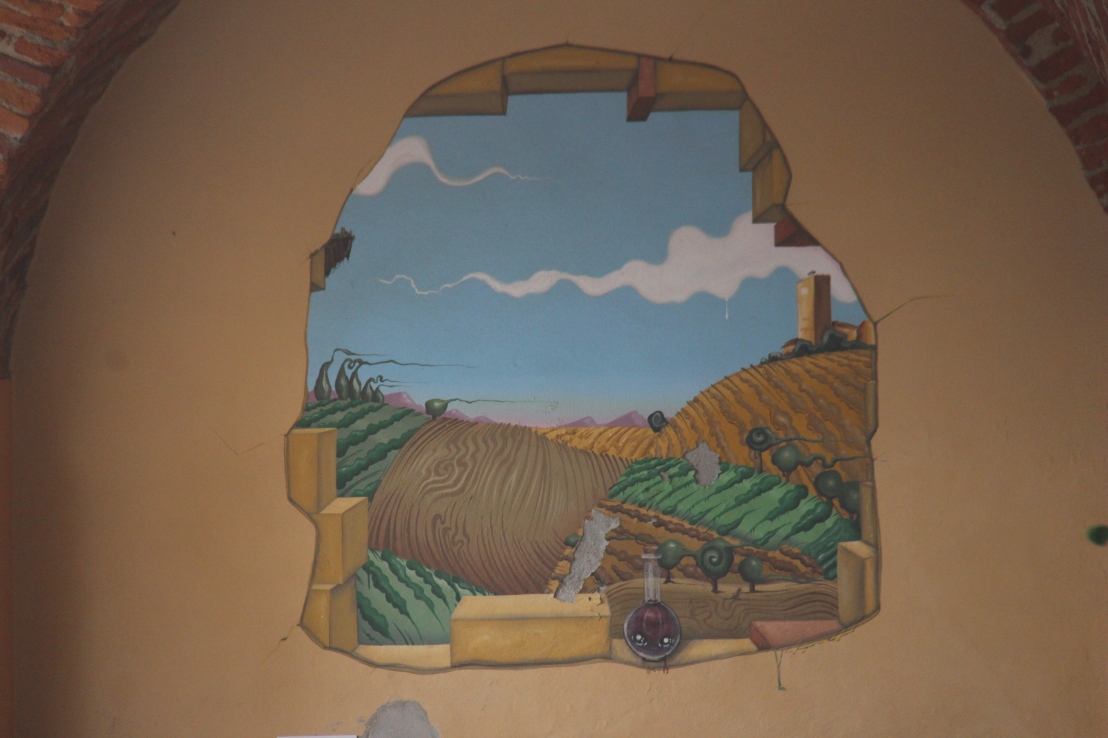 After leaving the town we headed for the nearby village of Lu to pick up the course of the next day’s race and see where we might want to watch from.

We eventually made a wrong turn – the pink arrows weren’t up yet to guide us – and we ended up in Casorzo, where we stopped for a quick snack just outside the town.

It was a rest-stop and had fantastic views, as well as some wall art of fairy tales.

We then made our way to the town of Montemagno, which has a castle – the oldest part is from the 12th century, with major additions in the 13th and 18th centuries.

We walked up and around it, but it was all closed up – it did have, of course, more incredible views.

We parked for the night in a large flat parking lot next to a pasta and sauce making place – Colin popped in and checked with them and they didn’t mind us being there.