After a nice shower and a bit of breakfast we continued on south.  Since we weren’t in a rush we took the ‘scenic route’ rather than the peage/motorway.

Part of the drive was quite nice but part was a bit drab – narrow winding valleys and not much greenery on the trees yet.  Also the gravel works on the river weren’t that attractive.

Making it to Imperia right at noon we took the coast road west along the Sea until turning off to go up to Poggio.

The car park at the top was pretty full but we managed to find the perfect spot – right near the fence and overlooking the Sea.

It was very windy so we didn’t spend much time outside, although I did take Mo for a short walk after lunch.  We also went to the cafe/bar a little later for a quick drink.

The bar is right at the corner where the riders will come from the crest of the climb, make a sharp left and start the descent to San Remo – we’ve watched the race from near that spot twice now, staying in the same car park overlooking it.

Race day was overcast but somewhat less windy.  There are only a few other campervans in the car park with us but it’s almost full – most of the cars were there yesterday so we assume the owners must live nearby and just leave their cars all the time.

Going early to the cafe we had a nice cappuccino, then a stroll through the town.

A couple of hours later another cappuccino, this time followed by a walk across the road to the wine store – the one with the taps coming out of the walls.  I opted for a ‘bag-in-box’ red that the lady said was dry and a bit rich but very good.

Partway through the morning many of the barriers were already up and the officious fellow with the whistle was already directing people here, there and everywhere.  Many amateur riders have been coming up, and there are definitely more folks around than the last time we were here – the 2020 race that was delayed to August because of the covid.

Since crowds were gathering we walked down to stake our spots fairly early, knowing we’d have an hour and a half or more wait.  I stopped at the very same spot as I did in 2020, and Colin continued down just past the next corner. 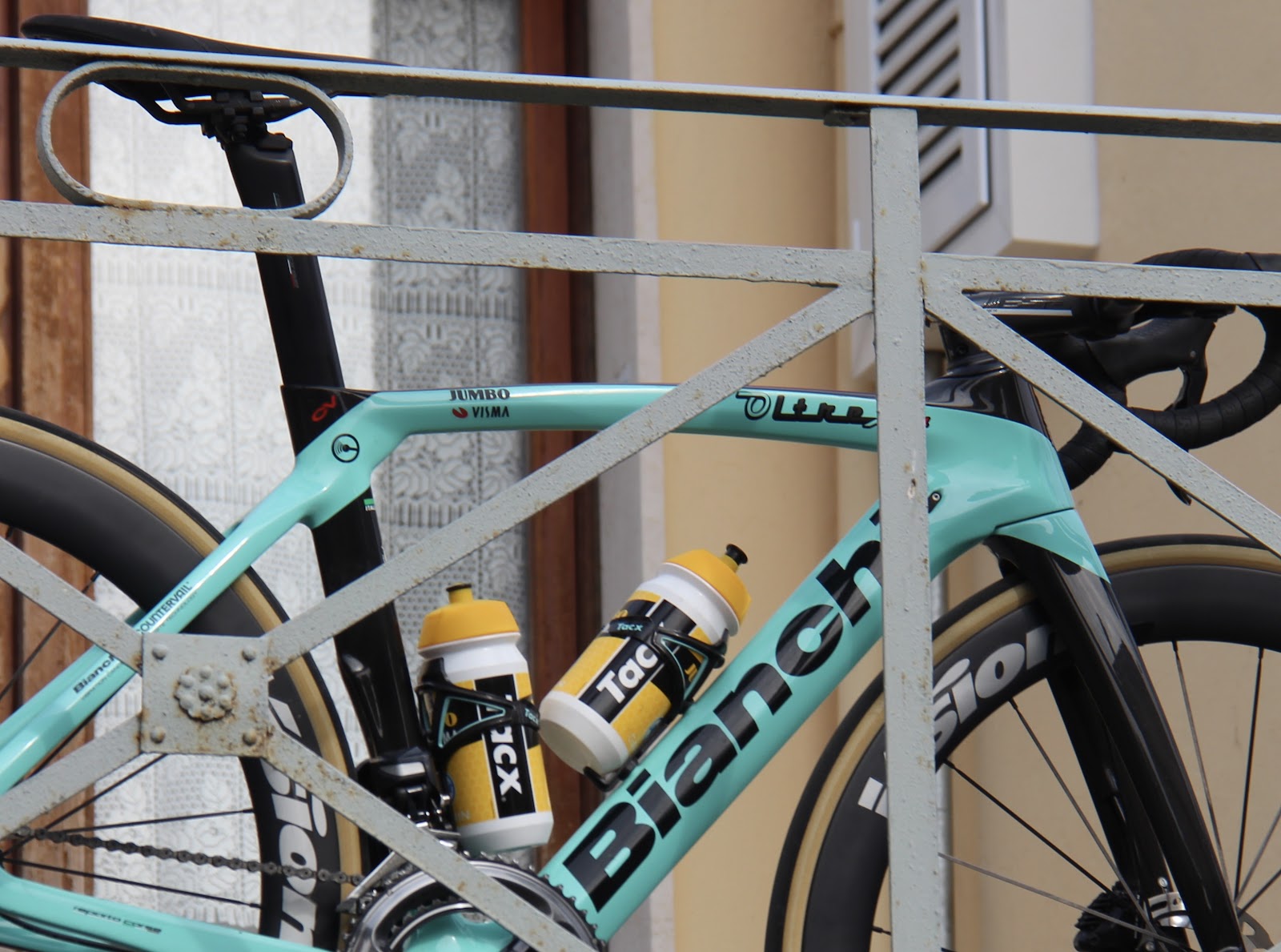 I saw a Bianchi bike above me and wondered if it belonged to a former Jumbo team rider as it had Jumbo Visma on the cross-bar.

I made friends with both the ‘official’ guy and the policeman that was nearest me.  Lots of folks were still coming up from places below and they eventually tied a rope across the opening I was sitting at.

The policeman made sure no one got in front of me, and ended up standing just down from my right shoulder.

I kept asking the official guy how long until the racers arrived and he gave me updates – they were way ahead of schedule because of a fierce tailwind.

The first rider passed at 4:37, followed closely by Pogacar, van der Poel, van Aert and Mohoric, with the peloton right behind.

Because it’s a sharp corner the riders lean into it and swing very wide to my side of the road.

By the time the last racer passed about 20 minutes later the race was long over in San Remo.  It was a sprint to the finish with Matej Mohoric coming out on top.

We tried to get into the bar to see any replays but it was so packed we didn’t bother until later when we were almost the only ones there enjoying a refreshing beverage.